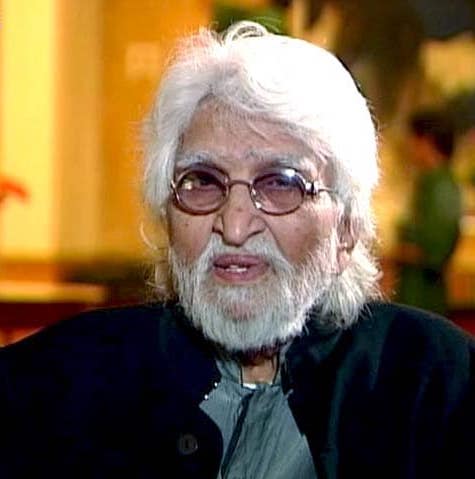 After the early death of his mother M F Husain's father Fida Husain got remarried and moved to Indore. His early education was in Indore. At age the of 20, M F Husain moved to Mumbai to join the J. J. School of Arts. During his early days in Mumbai he earned money painting cinema hoardings. In 1947 his first exhibition was conducted at the Bombay Art Society where his painting Sunhera Sansaar was shown. From 1948 to 1950 there was a series of exhibitions of M F Husain's paintings all over India In 1956, his paintings were exhibited in the art galleries of Prague and Zurich In 1966 Husain was awarded the Padmashree by the Government of India. In 1967 he made his first film, Through the Eyes of a Painter. It was shown at the Berlin Festival and won a Golden Bear. Husain's most interesting paintings of this period is the series named after the film-star Madhuri Dixit. He also made a film, "Gajagamini" with Madhuri Dixit. Recently he made another film , "Meenaxi-A Tale of 3 Cities". Painter turned filmmaker Maqbool Fida Husain finds film making as powerful medium of expression. Urmila Matondkar will be doing a lead role in M F Husains next movie , which is a comedy.

Silk screen method with 4 color technique which is yellow magenta sienna and black.with editions of 50 only.certified from gallery.