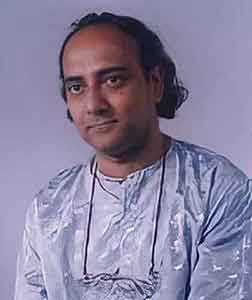 Born in 1950, Asit Mondal graduated from Indian College of Arts & Draftsmanship, Kolkata in 1970. Since 1970, he has participated extensively in exhibitions organized by Lalit Kala Akademies of Delhi, West Bengal and Orissa. From 1970 onwards he took part in several prestigious group shows, to mention a few are “Folk in Modern” in 2006, “Agony and the ecstasy” and “Indian Surrealism” both in 2007, and “Image and Symbol: Painters’ Perception” in 2010 all held at Aakriti Art Gallery, Kolkata. Asit had solo exhibitions in 1973 at the Academy of Fine Arts (Kolkata), in 1977 at Alliance Francaise (Kolkata), in 1988 at the Genesis Art Gallery (Kolkata), he exhibited at the Sri Dharani Art Gallery in 1988 and in 1990 at India Habitat Centre both in New Delhi and the latest being “Pulsating Decorativeness” in 2008 organized by Aakriti Art Gallery (Kolkata). In 1999 an exhibition of drawings on Kathakali was held at Max Mueller Bhavan (Kolkata) sponsored by Kathakali Art Centre and in 2005 he held an exhibition on Sir Charles Chaplin on his birth anniversary at Nandan (Kolkata). Asit has received a number of prestigious awards among which are the Academy Awards of 1974 - 75 and the West Bengal State Academy Award of 1979-80. A book of Drawings on Mahabharata was published by Prof. P. Lal, Writer's Workshop in 2002. His collection of works can be found in several private collectors and art lovers across India and abroad. The Artist passed away on February 2015.