A review of online exhibition ‘Women in Contemporary Indian Art’ that is on view at kalakritiartgallery.com

Through centuries, the notion of womanhood, the stigmas attached to it and the social and cultural significance pinned of it has changed, sharpened, fallen away, and at times, bubbled all together in the melting pot of gender and identity.The pieces in Women in Contemporary Indian Art revels in this very pot. Not all of the works depict women, but all of them are created by women artists. The exhibition is a simultaneous exploration of the idea of womanhood and the work of 11 women who have played significant roles in shaping the art world. 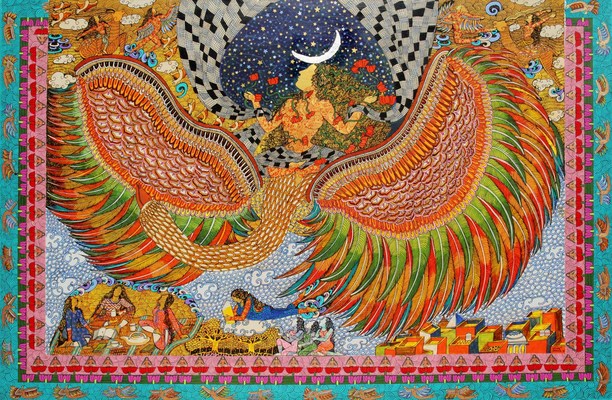 Taking several steps forward, Seema Kohli’s Altered Reality is full of reflection and self-awareness. In Altered Reality, we see women in various spheres of life. At the bottom of the picture is a group of women having a leisurely conversation over tea, while at another spot, we see a solitary woman reading. Near the top of the painting, women ride on animals, arms spread, wild. But what dominates is the powerful central figure of a winged woman, her wings spread over building roofs and spanning the range of identities women inhabit. She, with her all-seeing gaze, crowned by the crescent moon, is the image of introspection, the image of a woman who reflects on who she is. 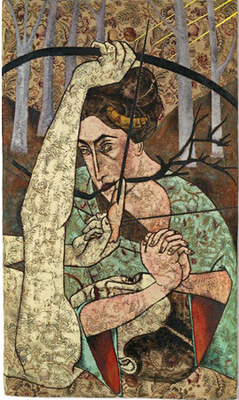 Similarly packed with layers is Anju Dodiya’s Cloud Hunter. The piece shows two figures, one of whom is lying on the other’s lap and nocks an arrow. The other, a woman, holds a branch between her teeth – reminiscent of a bow itself – while locking her arms around the other figure’s neck. Her arms resemble the bow’s drawstring. And just like that, we are left wondering as to who the hunter really is.

In contrast to the visual density of Dodiya’s work, Nilima Sheikh draws the barest outline of a woman. In a thin, white, thread-like line, a woman with a wraith-like smile holds a child in her lap.PS. Jalaja’s Tug of War shows people crushed together on either side of a rope, grimacing and shoving. In the background, twelve gleeful faces watch the spectacle. Small flags of various countries dot the background in a chaotic scattering. Crowded, clashing colours impress a sense of blind, rough clamour.

From the abstract to the very particular, Women in Contemporary Indian Art showcases the variegated nature of womanhood. On the other hand, it provides an exclusive space for women to showcase their art.

Godhashri Srinivasan is an up and coming writer studying Journalism at the M.O.P Vaishnav College in Chennai