Blurb: Short Shorts is Arts Illustrated’s micro-fiction series that borrows from the thousand words through which a picture speaks to create a moment of experiential art. Featured here, from our issue on Illustrations, is one such piece based on paintings by artist Poushali Das who explores the proximity of the human soul to the environment, largely through the medium of tempera, gauche and textiles. 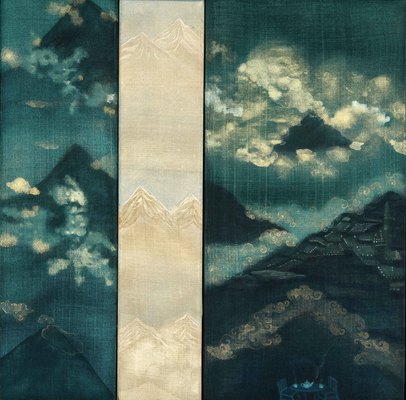 Rahul’s bus stopped outside the thick foliage that hid a hamlet. He had a long ride, literally, as the bus made its climb up the mountain. With each hairpin turn, a chapter from his past life flashed past his eyes like an achingly and cloyingly photogenic and an essentially empty arrangement. He had had a successful life. An ascending career, a doting wife and undemanding parents. Nevertheless, now all of that was down at the bottom of the hill. He was interested only in the village behind the green cover. He was here to overcome convention and get carried away. He walked past towards the village, eager and anxious. The villagers greeted him with glee. But in their happiness he noticed an anomaly. Every one of them had a broken bone. He began tracing, if not his tracks, at least his thoughts back. He immediately realised that to approach the seemingly harmless rusticity of the villagers was to be enveloped in a sort of chemical snare, to experience one’s cognitive functions slipping in and out of a phase. His thoughts were interrupted by the sound of a snap and he collapsed on the ground holding his left knee.

Manoj Nair is a writer, critic, curator and author of Pencil Sketches: a volume of writing on Indian visual arts, cinema, literature, and music.

Her Words, Her Weapon

A Handmaid’s Guide to Sanity

The Order of Chaos