Short Shorts is Arts Illustrated’s micro-fiction series that borrows from the thousand words through which a picture speaks to create a moment of experiential art. Featured here, from our issue on ‘Conflict’, is one such piece based on a work created by Myanmar-based artist Min Thein Sung that was presented at the 2016 Yinchuan Biennale.

It is always a gamble to play with an Arab’s bread, so goes the saying. Till then, Sossour was unaware of this saying as he cycled through the streets of Kasserine delivering bread. His family was one of those who had decided to sell bread at the same price as before, since the government had raised the price of wheat and semolina, triggering unrest. Everywhere else the price of bread had flown through the roof. At the same time that he stopped at the kerb, a group of women workers in a textile factory in the small southern town of Al-Mabrouka marched into the town chanting slogans against the price rise.
It wasn’t all quiet in Kasserine. The tension, though silent, was palpable. Sossour had picked up the afternoon lot of loaves after he had dropped his pregnant wife off at her parent’s place. On either side of the street, middle-aged men sat silently sipping coffee wondering what’s coming next and teenage guys hung around the corners waiting for ‘orders’. They were not smoking or playing football. Sassour was lost in his thoughts humming a verse by Tunisian poet Abu Alqassem Chebbi, which encouraged people to work hard and fulfil their dreams. 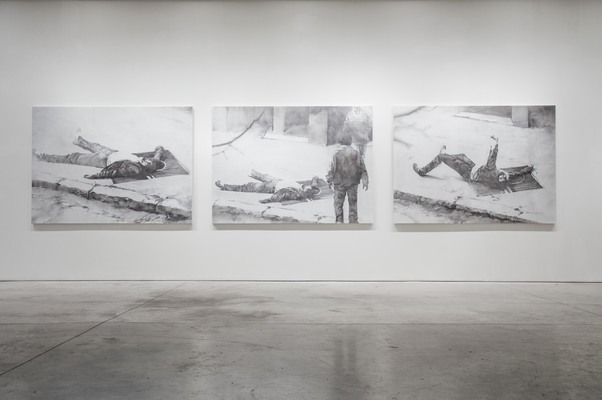 Sassour walked down the sidewalk, the blade of a kitchen knife glinting in one hand and pulling the cycle with the other. He parked the cycle as the youngsters, men and women moved towards him – to buy his bread. He then raised his knife to slice the loaves when he heard a few policemen charging towards him: ‘Get on the ground! Get on the ground. Put that down!’ One of the officers aimed his rifle at him. Sassour continued humming the tune. He put the loaves in a line and raised the knife once again when the firing began. Bang. Bang. Bang. Bang. Bang. Five shots. It was the shot to the head that killed Sassour. The bullet entered at the top of his skull, above his left eye, and exited at the base of his skull, behind his left ear. The man known in the neighbourhood as ‘the guy with bread on wheels’ was dead, lying in a pool of red, the colour of the Tunisian chechia. The crowd dispersed running for cover, helter-skelter.

After some time, three pedestrians passed by, walking at a steady pace, apparently unperturbed. They also didn’t know that years later the dead bread man’s yet to be born son would lead the Jasmine revolution on the very same street.

Manoj Nair was a writer, critic, curator and author of Pencil Sketches: a volume of writing on Indian visual arts, cinema, literature and music.