An exclusive interview with French photographer Yannick Cormier, who doesn’t own a Smartphone or a television set, and believes ‘one only needs to simply step out and talk to people to know what is going on.’ Cormier’s ability to dialogue with people, especially with artists from other practices, has strongly nourished his work. His images are completely void of any kind of voyeurism or exoticism, a common risk in photographing ethnic cultures, as is evident in his the ‘Theatre Land’ series – a testimony to the artistic and personal dialogue he has cultivated with director Murugaboopathy from the village of Kovilpatti, Tamil Nadu.
Edited excerpts from the interview. 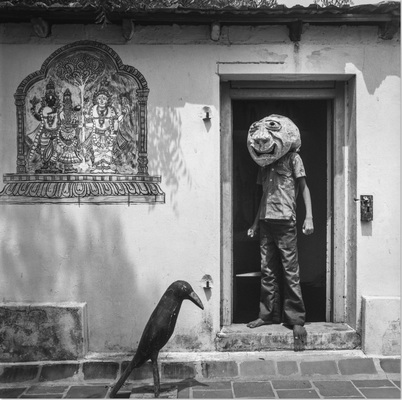 Images are from the series Theatre Land
Characters in ‘Theatre Land’ seem to emerge from the deepest recesses of a half-remembered myth. Who are they?
So, yes, these characters and personages that inhabit my series are part of a myth, part of the Tamil folk myth that is connected to Murugaboopathy’s theatre, and it is also my own myth, on what goes on inside me whilst I make all these connections. So, these are what I call archetypes and these images are symbolically charged but can also remain abstract. You can take any symbol, it’s very geometric and all but, in fact, still abstract and it expresses deeper meanings that are sometimes difficult to explain. But they always have a luminous, active and energy filled quality and that is what interests me in my work.

These photos of the theatre group are completely devoid of histrionics, but they have something more real – a sense of folklore. Is this your work with the camera or that of the people? 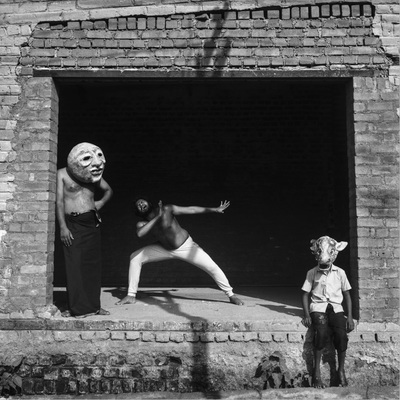 I am between myth and reality, between dream and reality, because I talk of profound things that are hidden in my mind. It’s a part of the inner world, so I try to translate them. Because I am a photographer, I translate them with my camera and, of course, since I am in Tamil Nadu, I talk of Tamil theatre and its spirit. There is a sense of folklore because Murugaboopathy’s theatre is deeply inspired by the folklore of Tamil Nadu. So, to answer your question, there’s a little bit of both – there is the camera and then there is what the actors, the people contribute to the dialogue.

The characters move around spaces in an ephemeral manner, they are inside, outside and somewhere in between. I am curious to know who moved and who followed – the actors or the camera? 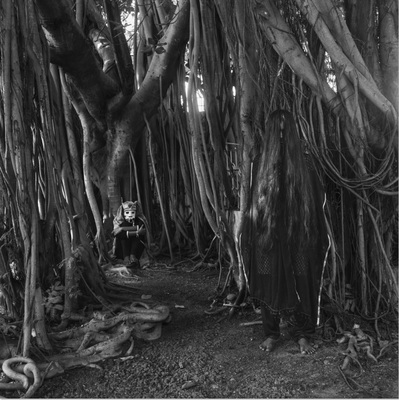 Mainly, I make them move. Sometimes it is them, but mostly it is me who has ideas. Some images come from dreams that come from what I have seen in their theatre, so there is a mise-en-scène when it comes to it. But sometimes the actors create something, an idea they have for an image or it can be a moment during rehearsal, and at that time I move around them.

In a series like this one, there are many stories for a novice spectator. Do you have a story in mind?

For the novice spectator like, say, you, no, there isn’t a story. There are too many stories in the world today. Everything must be a story and it’s becoming very irritating. Magazines ask for stories, on TV you must make stories, in politics you make stories, it is too much. I am trying to invoke something you could find in poetry before, that is feelings and intuition. And, well, there are stories, but they are very personal to me. I am not obliged to explain the stories behind them and they are really not important. I think there are powerful symbols that come through in these images; they can be felt from an aesthetic point of view first and so people are going to ask questions, and we always want to understand. But why always the need to understand things? We also need feelings and intuition, and that’s what I am trying to do with this work. But it is a delicate situation because it puts me at odds with a worldview that is ‘modern’ today. Though, really, I don’t care. What is important to me is to come back to things that are authentic, things that speak to me and that are primordial.

The interview has been translated from French by Seema Massot who has been navigating the waters of cultural management between France and India since 2009 and is now writing about experiencing art.
To read more, click here.

A Taste Of Love

One For The Road