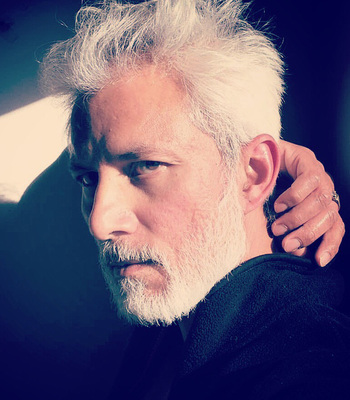 The earliest source of music in India is the Samaveda and it opens with this line: ‘Agna ā yāhi vītaye’ which  translates as ‘O Agni, come to the feast’. To a musician this invitation to Agni, the god of fire, is perhaps a prayer  to  be touched by  fire. To be granted the gift of ‘duende’. That incredible agitation of the soul. The one that Lorca,  the poet, brilliantly illustrated with the example of El Lebrijano who famously declared: “On days when I sing  with duende no  one can touch me”.

I was reminded of Lorca’s essay on duende time and again as sounds from places as far as Yemen and Cuba unleashed that same soul-agitation in me as I sat by the lake in Udaipur. The Udaipur World Music Festival is the creation of Sanjeev Bhargava, whose organization ‘Seher India’ has been bringing many international talents to India. Sanjeev is a sort of ‘duende-seeker’ who travels the world to find singers and musicians whose fire he can stoke and artfully graft into the musically fertile loam of India.

For the audience too the experience is as uplifting. Especially listening to ‘Gulaza’, a band from Israel that brought us centuries-old songs of Yemen’s Jewish Diaspora. These songs, as Igal Gulaza Mizrahi told us, have been passed down from mother to daughter and they speak of the guilt many mothers felt as they shushed their daughters into marriages with men they had never seen, men already married, men sometimes older than their fathers. Igal began his song by telling us how mothers consoled their daughters by singing to them the Biblical story of Isaac and Rebecca who had travelled great distances to marry him. How the two had never met but found true love after marriage. Among the Jewish women of Yemen it had become customary to “bring down the white chord of grace to the new couple” through such songs of hope and comfort. Igal and his troupe of four whose lone woman member is cellist Leat Sabbah sing these amazingly lively songs of women feuding with patriarchy in their own small ways. “We’re taking the world of tradition and bringing in a new evolution,” says Igal, “we’re transforming songs that are passed down from mother to daughter, from ear to mouth and from mouth to ear. The mothers of our mothers brought us something and they wanted us to do something new with it.” Which Igal is doing with so much spunk that he ought to be given a prize just for thinking up the idea. “They ask me all the time this question how I am singing women’s songs as a man, but for me more than anything this is a project about freedom.”

‘Albaluna’ a band from Portugal gave freedom an altogether different dimension by reimagining the eclectic psychogeography of the Iberian Peninsula. Its Afghan rubab-playing lead Ruben Monteiro explained it most simply: “Iberia for many centuries was a really special place that received so many people from all over the world. Not only because people came there but also because the Portuguese and the Spanish went out all over the world to make business, sometimes bad business (laughs), so a lot of different cultures came to Iberia: the Jewish people, the Arabs, the Vikings all came to the Iberian peninsula.” This resulted in Iberia absorbing influences far removed from its own native borders and ethnicities.

The ‘Delgocha Ensemble’ from Iran created a mesmerizing morning ‘sama’ at a venue that overlooked Lake Pichola, on a stage on which loomed a giant ‘mirror tree’ like some magical djinn billowing out of a bottle. Taghi Akhbari, Delgocha’s vocalist sang Rumi and Hafez. Taghi’s singing accompanied by the Persian ‘tor’ and ‘daf’ was familiar but different as great music often is because it connects us to something that we already carry inside ourselves: our emotions. As his wavering voice sang ‘Rakh Abdullah’, a morning rendition much like our ragas, we were transported to the desert ruins of Khorasan seeing the world as the Sufis saw it: a vessel waiting to be animated by love.

Compared to soft tonal lilts of Delgocha, ‘La Dame Blanche’ burst forth into the audience like a confetti shower with all the pluck and passion of Latino rap as its lead singer and flautist Yaite Ramos Rodriguez owned the stage Havana cigar in hand. Everybody from backpackers to turbaned locals at Fateh Sagar were seen swaying to the beats of this one.

South Africa’s ‘Hot Water’ was another band that got the evening crowd at Gandhi Ground energized with its foot tapping sounds that included ‘Wamkelekile’, their most popular soundtrack from the Adam Sandler film ‘Blended’. I was especially impressed by its lead Donovan Copley’s improvised Castrol can guitar. The jazz by the ‘Yves Theiler Trio’ featuring our very own Shree Sundarkumar on the kanjira too created a sizzling mix of sounds not normally heard in small town India.

It was amazing to see the chhattris of Udaipur echo with music from all corners of the world. A Flamenco singer’s wailing ‘siguiriyas’ in a place more used to the sounds of the ‘ravanhatha’! “I felt a lot of emotion from the audience,” said Rocio Marquez, “even if we didn’t speak the same language.” Truly, there are no borders in music. Only people who haven’t yet been touched by the fire.
Dhiraj Singh is a well-known journalist, writer, TV personality and artist who has shown his abstract paintings and X-Ray works in India and abroad.

More by the author