Lipi, who's been actively creating works since the 90's underscoring various feminist concerns in her native Bangladesh and the world at large. She has shown widely both in South Asian and Euro-American contexts, including exhibitions such as the 54th Venice Biennale and the Colombo Art Biennale (2012) and her works are in prominent collections such as the Guggenheim.

In her latest exhibition 'Vanity Fair', she seeks to extend her iconic use of razor blades to articulate objects associated with domestic labour as well as the implied violence of the skewed social contract that has historically subjected women to the tedium of the household, limiting their movement and extracting their labour for the engorgement of a patriarchal setup that cleverly derails all attempts at subversive correction.

“She addresses the irony embedded in the commodification of art, especially, art that represents movements that are staunchly critical of the economic circuits that they are likely to traverse in her works. Known for her feminist art practice that has over the years called into question the brutal ways by which overarching patriarchal structures have confined women, and subjected them to physical as well as psychological violence, the artist is also self-conscious of the way her own work, as well as the work of other explicitly political artists are being subsumed and appropriated by the logic of the capital in an art context that is undeniably yet to shake off deeply rooted sexism. 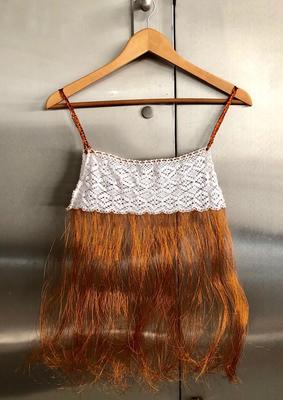 While the presence of such work is subversive in itself — to be seen, recognised and heard — making emancipatory dents in the system, this exhibition goes a step forward in acknowledging the toxic masculinity that is easily able to appropriate and divert resistance movements to its own benefit. And art is not alone. This logic of technocratic late capitalism seeps into civilian movements as well. In the current context that we occupy, who is able to completely ameliorate cultural production to a position where it is completely untouched by the neo-liberal patterns of production and consumption that unconsciously inform our thoughts, behaviour and aspirations?