The animation ‘Thermostat 6’ from 2018 scarily echoes the current installation ‘Sinking House’ by Extinction Rebellion in London, which is a poignant representation of the visible effects of rapid climate change 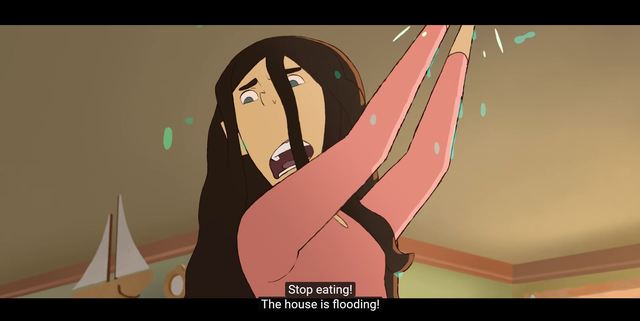 Still from the animated short film Thermostat 6 (2018), directed by Maya Av-ron & Marion Coudert & Mylène Cominotti & Sixtine Dano. Image Courtesy of the GOBELINS team.
After rejecting climate change bills, the Venice Regional Council ironically witnessed its entire office flooding. It is hardly unsurprising that the adverse results of global warming are in effect around the world.
Bringing to light the mounting problem of rising sea levels and this drastic change is ‘Extinction Rebellion’, an international movement that seeks mass-scale revolution by way of non-violent civil disobedience. The inaction of the United Kingdom government towards excessive flooding in London is what prompted this call to action, and, ‘In the early hours of Sunday, November 10, Extinction Rebellion activists staged an action on the river Thames in London. A classic suburban house was seen floating down the river, sinking into the water in yet another attempt to send an SOS to the government on climate inaction and draw attention to the threat humans face from climate change and rising sea levels.’ 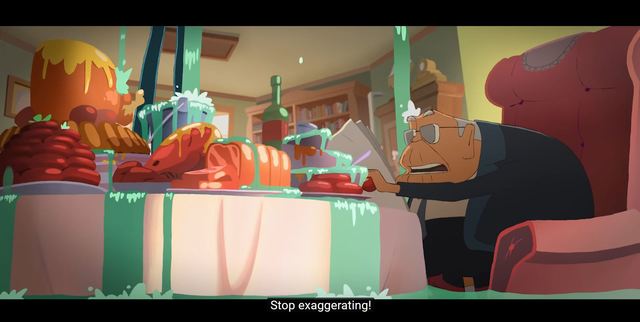 Still from the animated short film Thermostat 6 (2018), directed by Maya Av-ron & Marion Coudert & Mylène Cominotti & Sixtine Dano. Image Courtesy of the GOBELINS team.
Made by artists Katey Burak and Rob Higgins, the installation ‘Sinking house’ is part of the project ‘Act Now: Our House is Flooding’. The artists further stated on the website: ‘When I hear the facts about climate change, my brain can scarcely comprehend them; they are vast and scary. We wanted to make something that people can visually connect to, whilst leaning on the government and the experts to make the changes that need to be made.’

Still from the animated short film Thermostat 6 (2018), directed by Maya Av-ron & Marion Coudert & Mylène Cominotti & Sixtine Dano. Image Courtesy of the GOBELINS team.
The reality of our fast disappearing futures is eerily echoed in the animation ‘Thermostat 6’, directed by Mylène Cominotti, Marion Coudert, Maya Av-Ron and Sixtine Dano. Part of the graduating class of 2018 of the Gobelins - School L’ Image, the team released a poignant animation that year on the issue of climate change. It starts with a family eating together at the table, in a house with a leak, and as the mother waltzes back and forth between conversations and bringing dishes from the kitchen, the father and the grandfather argue about the house and how the weather seems to be getting hotter. In the midst of this strange chaos, the daughter of the family notices the leak and asks why it was not fixed. As the adults avoid replying to her and deflect her frustration, the leak keeps getting bigger and the whole house floods. 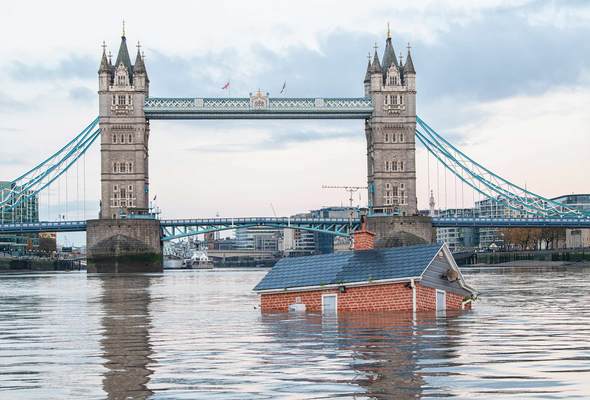 Extinction Rebellion, Sinking House, Installation in River Thames, London, 2019. Photograph by Guy Reece. Image Courtesy of Zoe Broughton and Extinction Rebellion.
As the animation ends with the whole family rushing up to the attic to escape the flooding, the daughter opens up the window to try a different escape route, only to find that the entire ocean has, in fact, flooded everything. The stark imagery of the houses in water and the reality of the installation are incredibly hard to miss, thus become a deafening call for immediate action.