Blurb: The recent play in London titled Red on American artist Mark Rothko is a powerful exchange of ideas on the ways of seeing, and how within the spectrum of an individual there are multiple perceptions, if we only choose to see. 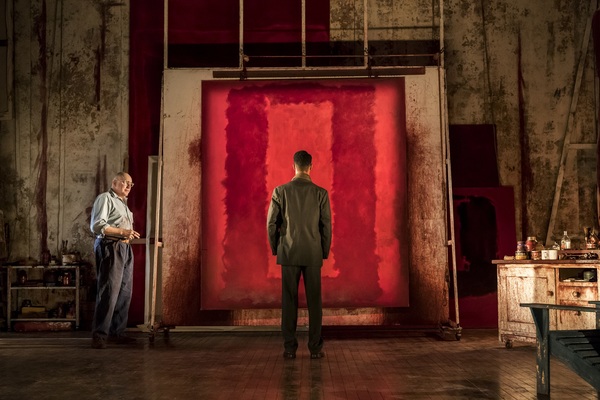 As we take our seats for Red, a play about the American abstract expressionist artist Mark Rothko, the actor playing Rothko is already present on stage, sitting with his back to us in deep contemplation of one of his enormous paintings that is positioned to the back of the stage, and facing us. We shuffle along the narrow row, whisper about seat numbers, remove coats, stow bags, settle ourselves, while Rothko maintains his solitary study. The stage is set as the artist’s studio, lined with canvases waiting to be primed, half-finished works and tables cluttered with pigments, pots and brushes. A young man arrives suddenly on stage – the play has begun – yet the first interaction between him and Rothko is an imperious gesture by the artist commanding silence, before finally he speaks: ‘What do you see?’.

Seeing, looking, contemplating – these are major themes in this two-hander play that covers a period of about two years at the end of the 1950s. The story is based on a series of real events. In 1958, Mark Rothko, now painting in his definitive style, was commissioned to produce a series of large paintings for the new Four Seasons restaurant in New York’s Seagram Building. Rothko’s idea, as he articulates in the play, was to paint ‘thirty or forty and then choose which work best, in concert, like a fugue.’ Later, he will refer to the Seagram murals (as they became known) as ‘a continuous narrative filling the walls’. The meaning and consequences of this commission are debated and played out by Rothko and Ken, an imagined character who comes to work for the artist. Fundamental questions about how art matters in society drive the play forward. Famously, Rothko was to withdraw from the commission, instead gifting the paintings to Britain’s Tate Gallery. 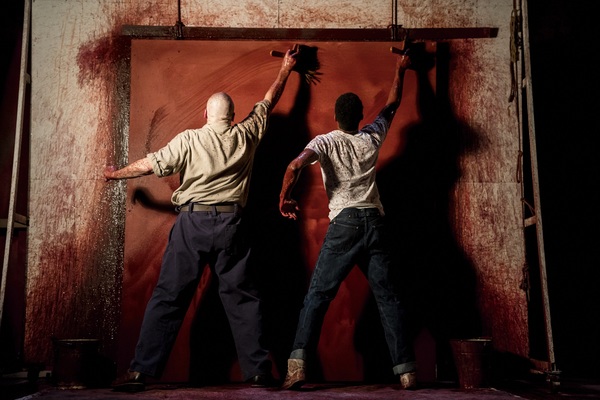 Red was written by John Logan (perhaps better known as the screenwriter of a number of Hollywood blockbusters, including the Bond films Skyfall and Spectre, The Aviator, The Last Samurai and Gladiator). He talks of how he was profoundly affected by seeing the Seagram murals at Tate Modern during the mid-2000s. ‘I took time to let the pictures work on me. Rothko is a painter that requires time and a certain generous emotional access. Then I read the description on the gallery wall about how and why the murals were painted. The whole play came to me in that instant.’

However, this is not only a play about how we view art. Logan’s staging makes the audience witness to the process of creation. Ken’s role is to ‘stretch the canvases and mix the paints and clean the brushes and build the stretcher and move the paintings ...’ Ken also studies Rothko as the great man broods, rages, stomps, prowls and roams around his studio. There is a stunning moment of choreography at the mid-point of the performance when the two men work in rapid and intense symbiosis to prime one of the huge canvases. But there is disharmony, too. Rothko, after further scrutiny of one of the unfinished paintings, suddenly ‘sees’ what the next application of colour should be, but is frustrated by Ken’s mistimed and misjudged interjection when he says, ‘Red.’ ‘By what right do you speak?’ Rothko roars, slinging paint at his hapless assistant.

Suzanne McNeill lived in India for seven years, first in Chennai and then in Delhi. She has now returned to Scotland where she works as a freelance writer and graphic designer.