The Padmanabhapuram Palace is home to one of Kerala’s famous murals. But, as our writer discovers, there is a lot more to these wooden walls of yore as they paint a picture of grace and divinity. Edited excerpts from the story. 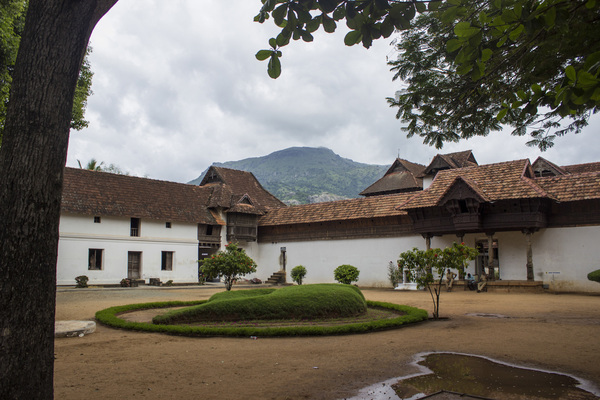 Padmanabhapuram Palace against the backdrop of Veli hills. Photograph by Sudharshan K.

20 years ago, when I visited the Padmanabhapuram Palace, I remember being struck by its understated magnificence. I remember walking into the palace and hearing in the silence of the empty wooden chambers voices and imagery from King Marthanda Varma’s time, and feeling as if I was in some sort of dream space. The ethereality of that experience for me, somehow, converged in the 18th century murals on the topmost chamber of the palace. It was as if my mind had decided to train the spotlight on this lost art form, preferring to keep the rest of the palace largely in darkness. The forty five murals spread across 900 square feet of wall space, depicting largely Lord Vishnu and Lord Krishna in their iconic forms was a revelation in colour and technique. Images of the gods such as the frontal seated icon of Chandraswami or Krishna as Venugopal sit alongside lively depictions from contemporary life of musicians and devotees. The decorative patterns of clothes and jewellery and garlands use up the entire space, with introduction of plant life and fish flowing in the river below. These create such vivid patterns of colour that the room vibrates with green and red, black and cream. In these wall murals the assertion of hand gestures, bodily movements, head gear with exaggerated eyes, at times rounded and fierce, share strong affinities with performances of Kathakali. The inspiration for these paintings was clearly derived from local folk idioms of theatre and also from the ritual floor patterns of kalamezhuttu made of coloured powder. Its aesthetic appeal was undeniable, as was its distinct echo of King Varma’s own devotion to Lord Padmanabha (an incarnation of Lord Vishnu) and his unconscious need to emulate the paintings at the Sri Padmanbha Swamy Temple in Trivandrum. It was as if, dedicating an entire city, a palace and a fortress was not enough; they had to find further credence in a physical image.

So when the opportunity came up to visit the palace again, I was looking forward to revisiting the murals and wondered if time that played with the mastery of the artists of yore would have altered my own memory of it.

Padmanabhapuram was a changed city. Back then, as you drove into Padmanabhapuram from Trivandrum, the roads were uncluttered, with enough space for the mind to wander through its meandering streets. Now, it was teeming with road-side shops and restaurants, a sign of the city’s growing importance as a tourist destination. 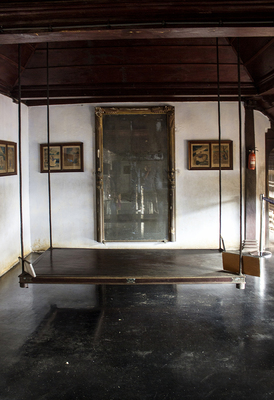 350-year-old Belgian mirror in the queen's and princesses' chambers. Photograph by Sudharshan K.

Even though the palace holds power over you the minute you set eyes on it, I was itching to see the murals. Sadly, that was not meant to be as that section of the palace had been closed off from public view and no amount of persuasion moved the authorities to make an exception. In retrospect, though, I think it might have been a boon in disguise. It forced me to actually ‘see’ the palace for the first time and truly understand why its historic and cultural significance is buried deep into its wooden structure, and not so much in the murals, as my memory would have me believe.

Dr. Geeti Sen is a cultural historian and the author of six major books on Indian art.