The Walls That Breathe

Arts Illustrated’s new column takes you into the world of art collectors and connoisseurs, giving you an exclusive peak into the lives of the artworks from the other side, so to speak and deconstructs the tenuous bond between the artist, artwork and collector. We begin with artist Manisha Gera Baswani and her husband Rahul Baswani who believe theirs ‘is a living collection, aging with them’. 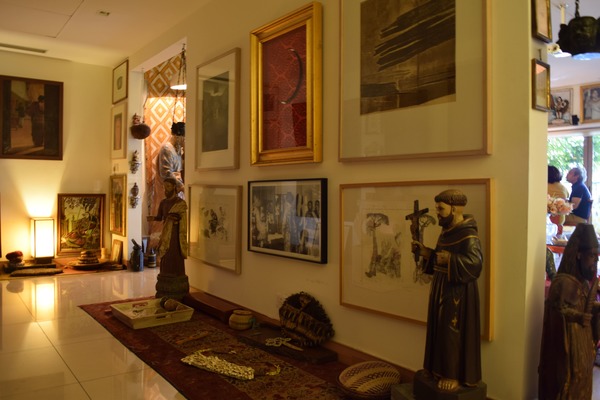 I did not have to look for their number on the second floor in an apartment complex in Gurgaon to know the house of Rahul Baswani and Manisha Gera Baswani. Artworks cover up the façade wall, right from the lift lobby of their house. Rahul is an executive coach and corporate trainer and his wife, Manisha, is an established artist. Together with their two sons, they live – literally live – with an envious collection. It includes works of some of the most significant artists, from India and Pakistan and beyond, and also crafts from various parts of the world. Himmat Shah heads in bronze share a corner with traditional Tanjore paintings. Monochromatic works of Jeram Patel, Nasreen Mohamedi and Zarina Hashmi seem as though they are having a comfortable conversation in the living room. Manisha’s artist-portraiture project takes up a full wall in the television-lounge and yet another corner has a floor-to-roof shelf with hundreds of owl sculptures collected from across the globe. ‘The first show that Manisha and I saw together was an FN Souza show curated by E Alkazi. Her brother was a friend and because he bailed out that evening, he sent Manisha instead and Manisha offered to “entertain” me at this show. Our fondness grew for each other and we ended up seeing many shows together; in fact, art galleries became the natural dating haunts,’ says Rahul.  And through cups of tea and animated conversation, more of the anecdotes and stories come tumbling out, each as distinct and memorable as their collection itself.

Edited excerpts from the conversation

I was the collector and she the advisor…and well, a co-financer The first work that we ever bought was a small etching by Amitava Das. Preima Kurien ran a gallery called Art Inc. She must be credited to put us on the path of collecting art. She would show us small works, so that they remained affordable for us to buy. She would also constantly guide us and warn us not to go overboard. ‘Learn to savour what you have,’ she would often emphasise.

When I started collecting, I rarely went beyond the headline; but later we developed a method to this impulse I can now say that it’s good to know about the background of an artist, his experiences and concerns. It helps to understand the story behind the work and as a viewer one can recount the magic. But when I first started to buy art, it was pure impulse. I would see a work and if I reacted to it, I would try to acquire it. Art in those days did not have the kind of economic value it has now. It was still an indulgence, though. As Manisha and I started to see shows and make decisions jointly, we arrived at a method to assess and shortlist. We would go to a show and walk in opposite directions, mentally marking the works we liked. We would then exchange notes and walk the show together. The shortlist would only be the ones that would overlap in both our lists! 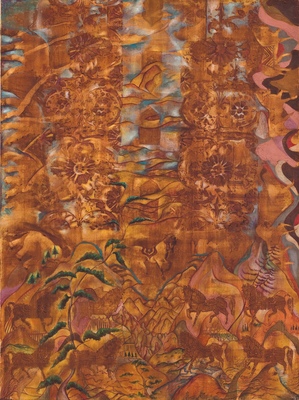 We went to the framer to get a pre-preview of a show, and at another time got the biggest surprise when we took one work to reframe and got back two!  Since we were never seriously buying to build a commercial collection, we did not consciously try to invest in one or few artists. What happened was very natural. With Manisha’s influence, we were following a genre and therefore organically went deeper into a few practices. Himmat Shah was one artist whose works we seriously invested in to get a broader representation of his practice. But there were times when as a gesture of encouragement we would buy from a heartbroken and dejected artist, whose show did not fare well; but later realised that was not the ideal way to buy. The step change for me was that I would first buy art and then get to know the artist. But when most of our buying became collaborative, we bought work of the artists we already knew. We once actually went to the framer who was preparing works for an upcoming show just to get the first pick! And then there was a recent incidence that was the biggest surprise ever. We had bought a work of Nasreen Mohamedi many years back. Since the frame was old and no one really bothered to put acid-free mount in those days, we decided to have it reframed. While at the framer, we had the work opened…and to all our surprise, it actually had a whole different work at the back! These things don’t happen often!

Read More: Celebrate This Ganesh Chaturthi With Artworks From Mojarto