The charisma of the number five was not lost on “Coco” Gabrielle Chanel personified in the launch of the perfume – Chanel No. 5 – in 1921 that remains to this day a global fashion icon, and intrinsically connected to the memories of scent. Edited excerpts from the story.

My mother remembers vividly how the perfume Chanel No. 5 was reserved by her mother only for special occasions as opposed to the other generic Eau De Cologne that was relegated for everyday use. It was a rare luxury item for my grandmother, and my mother is unsure how or where she purchased it back then. It is possible it was brought back by family members travelling abroad, who perhaps were also the source of her beloved Japanese chiffon saris. My own association with the perfume is distinctly connected with my grandmother. As a result, the perfume is less about the characteristics that make it or its immense cultural capital, and more about revelling in the memories of strong women from my childhood that the perfume conjures up.

In fact, memory plays quite an important role in the appreciation of perfume. As opposed to thinking of perfumes as new inventions, it is probably more accurate to see them as interpretations of ideas, experiences and memories – both individual and collective. Beyond allowing me to fleetingly grasp the memories of my grandmother and Chanel No. 5, the perfume’s powdery base notes in particular also bring to mind another vivid childhood memory – of talcum powder applied liberally after bathing in hot climates and the clean smell of sandalwood soap. 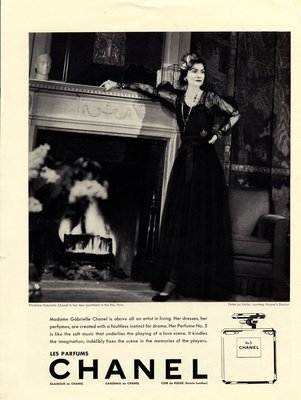 In fact, for “Coco” (Gabrielle) Chanel, too, it was memory that played a role in the perfume, starting with the charisma of number five that was not lost on her. The number was deeply embedded in the Cistercian style of architecture of the Aubazine abbey, where a young Chanel spent six years of her life after the death of her mother, but Chanel is said to have also noted it in other spaces, symbols, and objects around her – in the stars, flowers, and so on – and hence believed profoundly in its magic and beauty.

So, when the time came for her to launch a signature perfume, some say the number played a prominent part in her picking the fifth sample from the ten prepared for her by noted perfumer Enrest Beaux. Launched according to some on the fifth day of the fifth month in 1921, packaged in an understated and simple glass bottle shaped like a clinical vial – a design that has largely remained unchanged – Chanel No. 5 remains to this day a global fashion icon.

Chanel No. 5 gained its distinctive notes from approximately 80 ingredients. These included some of the most luxurious and expensive extracts sourced from Jasmine, YlangYlang, Oak Moss, Rose, Vanilla, Patchouli and Sandalwood, to name but a few. Professor Debra Parr calls it the first modern abstract composition that, at the time of its launch after the First World War, was truly path-breaking and unique. Path-breaking because up until then single flower notes such as rose or violet were the norm, especially for ‘nice’ women from respectable backgrounds. Chanel, however, wanted to push past these demure boundaries and introduce bolder notes that made a woman smell sensual, sexual even. In doing so, the perfume she picked presents two bouquets, one natural and one synthetic that work together to create an edgy balance.

Arti Sandhu is an Associate Professor of Fashion Design at Columbia College Chicago and the author of the book Indian Fashion: Tradition, Innovation, Style.