The humour in Manglesh Dabral's and Hemant Divate’s poems lives in ironical comfort amidst cold truths and harsh realities that populate our senses. Edited excerpts from the article.
Very seldom is poetic humour of the-roll-in-the-mud-and-die-laughing variety. The poems of Manglesh Dabral and Hemant Divate, ironical and subtle, will bring a smile to our lips even as they show us the world we have lost and the world that is now. If Dabral’s poems hanker after what is lost and speak of the banality of everyday existence, then Divate’s poems are a tongue-in-cheek expose of our consumer-driven urban culture.
Manglesh Dabral is a poet, journalist and editor with five published collections of poems. Imbued with an unassuming lyricism, there is an inherent irony in all Manglesh Dabral’s poems. The poem, ‘This Number Does Not Exist,’ is a commentary on the present. The poem seems to embody the loss of a time where one was once welcome, saying, ‘The door is open you can stay here…’ Such telephone numbers that offer hospitality, space and time are no longer available.
How often have we heard the statement, ‘This number does not exist,’ and our mouths have downturned with disappointment? There is a sudden lack of response, an unexpected outcome. In this poem, it’s almost as if Dabral is laughing at the world which exists now, where any number he ‘desperately’ dials does not say, Come along for a while just for the sake of it any time in this universe… but talks of only business only transactions buy-and-sell… The numbers that once welcomed us are strewn in the gutters like old diaries. We may in fact miss the irony behind it all, the sad humour in this poem, if we do not look at it closely enough.
This number does not exist.
Wherever I go whichever number I dial
At the other end a strange voice says
This number does not exist yeh number maujood nahin hai
Not too long ago at this number I used to reach people
Who said: of course we recognize you
There is space for you in this universe
But now this number does not exist it is some old number.
At these old addresses very few people are left
Where at the sound of footsteps doors would be opened
Now one has to ring the bell and wait in apprehension
And finally when one appears
It is possible that he might have changed
Or he might say I am not the one you used to talk to
This is not the number where you would hear out your grief
Wherever I go numbers maps faces seem to be changed
Old diaries are strewn in the gutters
Their names slow-fading in the water
Now other numbers are available more than ever with and without wires
But a different kind of conversation on them
Only business only transactions buy-and-sell voices like strangers
Whenever I go I desperately dial a number
And ask for the voice that used to say
The door is open you can stay here
Come along for a while just for the sake of it any time in this universe 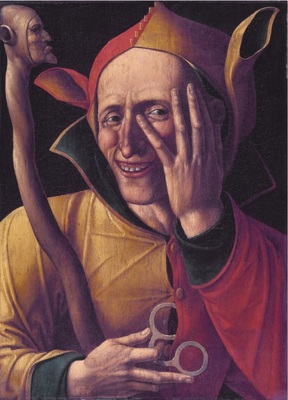 Anonymous, The Laughing Jester, 15th Century, Netherlands. Art museum of Sweden, Stockholm
Another one of his poems, ‘The Seven Day Journey’ again cocks a snook at our existence, commenting on how we begin each week on hope, thinking on Monday that somehow this week will be different; but by the time Friday comes around, we realise that so far we’ve accomplished nothing and by Sunday we are caught in prehistoric immobility.
First, Monday flaps open like a freshly washed sheet
Hope snuggles up and says, This time
We can take a different approach
So we map out the problems along the way
And where the detours have to be
Tuesday’s like a cliff
A blind either/or
Ahead do we turn or slide down the descent
And how much concentration and courage do we need?
Through Wednesday’s binoculars we can see far ahead
It won’t be as easy as Hope first had said
There he was, just as before,
Unsettling indefinite haze in the head.
Thursday’s like an inn along the way
Half the distance we’ve already traveled
And now we know exactly where we stand
And perhaps in these difficult times, there may just be a way out
Coming along that very path Friday gives us patience
But it's clear that so far we’ve accomplished nothing
And now it’s getting late
And we haven’t even sent a postcard.
With that anxiety we enter Saturday
A subterranean space where it’s difficult to tell
Whether we’re moving or still
And when someone asks how I am
I say there’s nothing worth the telling.
The next morning Sunday comes
Day of rest and things
Assume their prehistoric immobility…
The poem says, ‘And now we know exactly where we stand…’ but do we ever?