Jane De Suza’s ‘The Spy Who Lost Her Head’ doesn’t feature a protagonist with superhuman skills of deduction, nor a plot that fits together like a jigsaw puzzle. Here, quirks and imperfections are pushed into the spotlight. Edited excerpts from the article.

When I first reached out to Jane De Suza for some insights into her debut novel The Spy Who Lost Her Head, she asked me, curiously, ‘What about the book caught the attention of a magazine on art?’

For starters, there’s the topsy-turvy world on the cover, with flipped ‘S’s and ‘P’s in the title, and the bizarre image of a flashy female detective with a box in the place of her head. At the beginning of the novel, our heroine is mysteriously missing. And when she confides in us about her predicament, dealing with unsuitable suitors in the village of Gayab where she’s from, she does it in her own colourful version of the ‘Queen’s English’:

They is getting for me one made-in-heaven proposal after another. You see, my Papaji is Lord. He is Lord of many lands. He is having lots money and he is buying anything he wants. He is buying husbands for me, like other mans is buying onions. At bargain price. But I am shake my head at all. ‘This one is playing with his toes’, ‘that one is dig his nose’, ‘that one is spit when he is talk’, ‘and that one is duck-walk!’ 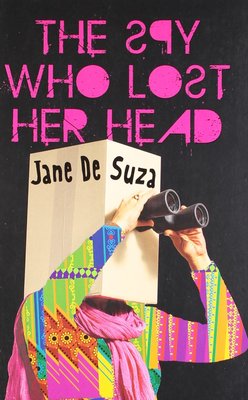 Unlike other detective stories I’ve read, this one didn’t feature a protagonist with superhuman skills of deduction, nor a plot that fits together like a jigsaw puzzle. Quite refreshingly, quirks and imperfections were pushed into the spotlight. Clearly, an original experience of the crime novel was in store.

Newly arrived in Mumbai with fourteen suitcases in tow, Gulabi is determined to find herself a ‘Bemba’ in the big city (it is meaning he is to be Engineer MBA—B.E.M.B.A). Instead, she finds herself in the accidental possession of a head – an actual dead human head that reeks of a foul murder and a shady web of lies. Declaring herself a Super Spy, Gulabi decides to get to the bottom of the mystery, but does it in her own style – decked up in dark glasses and a slick sari, and armed with a jar of chilli powder. A hilarious unraveling of the murder mystery ensues as Gulabi skitters from one wrong conclusion and fiasco to another, but finally digs up the truth – quite literally, in this case.

Along the way is truckloads of drama. There are fake suicide attempts and burnt brinjal fry as Gulabi pursues her landlord, whom she has identified as a suitable Bemba. There are pumpkin-and-head swaps and high-octane taxi chases as the baddies chase Gulabi along Mumbai’s busy streets. There are secret ice cream tubs and midnight forays into dark alleys, when Gulabi rescues her ditzy room-mate from her kidnappers. There’s also a stake-out that ends in the acquisition of potato buns but no new clues. A dodgy seer, a fortune-telling parrot, a rifle-wielding Papaji and a Minister Clean are among the other characters that feature in Gulabi’s escapades, each loonier than the next.

Poonam Ganglani is an independent writer based in Chennai.