Starting with the blue of the sky and the ocean, of the vast and the beyond, we traverse through the many moods and textures of the colour blue as it weaves in and out of the personal and the public, eventually creating unforgettable patterns. Edited excerpts from the article. 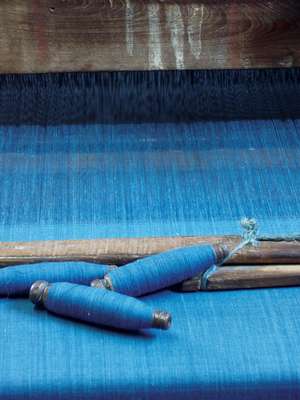 I woke up to a blue sky this morning and it was rather disorienting. Whatever happened to my all-too familiar sooty Delhi sky? I reoriented myself to my Goan surroundings and walked by the ocean as the sky became inky blue. The water took on a darker shade and the frothy white surf seemed jewel-like. It felt like it was straight out of a Van Gogh painting. I think I never realised how much I have come to like the colour blue in all its myriad shades and hues. As if in a film, many images flicker past in a rapid cinematic flashback, disjointed and only connected by the colour.

I closed my eyes and went back in my mind’s eye to my teenage life and seeing the legendary film-maker, Kieslowski’s Three Colours Trilogy: Blue, White and Red. The trilogy films, notionally themed on the French flag, made the colours a protagonist in the film. Over the next two decades I saw the films as many times, and gesturing mildly towards it, I write this piece on the colour blue or nila. 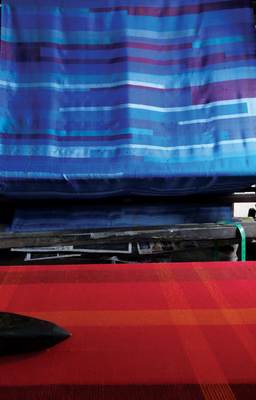 Blue and red tapestries conceived by me on the loom at Kurma Rao’s workshop, Ahmedabad. Image Courtesy of Siddhartha Das.

As a 20-year-old apprentice to a family of dyers and block printers in Rajasthan, I ended up washing a hundred sheets in the local pond and then dyeing the fabrics in the natural dyes at the workshop. The dye that I was most nervous to work with was indigo. To create the indigo dye, one had to mix chuna or lime with the dye in a vat. It was a fetid concoction that felt like you had your face to a sewer and the lime seared through the palms at the mere touch of water. Despite the pain, it was one of the most thrilling times of my youth, and indigo as a colour and a protagonist kept rearing its head through it. The same indigo of Champaran, Bihar, that Gandhiji brought into the limelight 100 years ago, that made him from Mohandas to Mahatma. 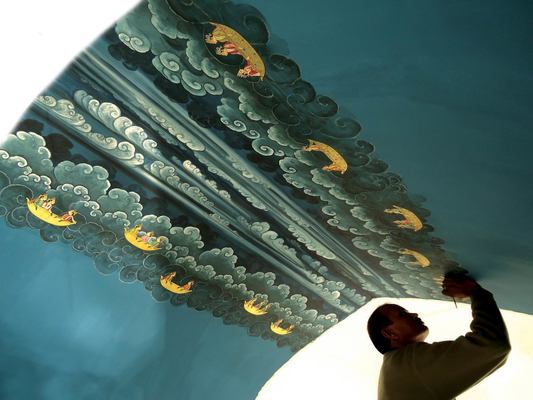 Celestial beings on their vahanas in the clouds and the seas, conceived in collaboration with miniature painters of Jaipur, Jal Mahal, Jaipur. Image Courtesy of Siddhartha Das.
While indigo was always considered Indian, it sadly eludes us in its natural form. So, I was thrilled when two decades later the pigment once again came into my life, this time in all its splendour in a tiny village in northern Andhra. I was in a village, whose name I forget, near Chennur, to document the revival of natural dyes pioneered by the inspiring Uzramma, founder of Dastakar Andhra with her collaborators of weavers and dyers. I spent hours in the village photographing the weavers hunched over their frame looms, the room filled with the rhythmic beat of the oscillating shuttle that takes the fragile blue yarn rocketing across the tensioned warp.

Siddhartha Das is a designer and visual artist who uses culture for socioeconomic change, and was the recipient of the British Council International Young Design Entrepreneur Award in 2009.

More from Arts Illustrated :
In Search For The Perfect Blue

In A Race Against Time