A review of the ongoing solo exhibition featuring the works of acclaimed artist Ratheesh T held at Gallerie Mirchandani + Steinruecke, Mumbai. The show is on view until November 20, 2018. 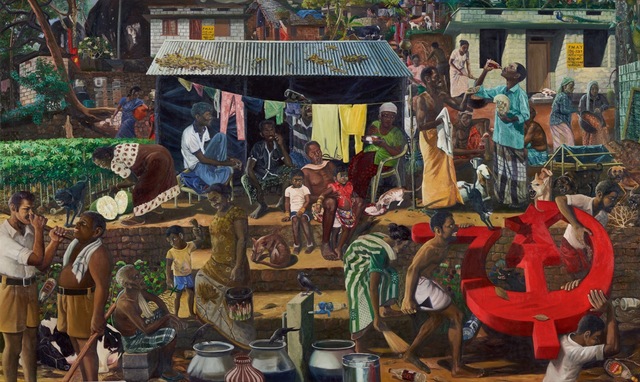 To stroll into Ratheesh T’s exhibition is to walk into a maze of delights and surprises. If this doesn’t sound lofty enough for an art exhibition, the artist wouldn’t mind. I know because I had the unexpected pleasure of his company as I browsed. ‘Art is about enjoyment,’ he says to me with a big smile. An apt comment on his large canvasses filled with Kerala’s lively colours, talkative characters and bustling activity.

A few things strike you about the oil on canvas paintings. He’s put himself, quite literally, into a lot of them. In one, the artist-persona stands naked amid a clutter of clothes and other trappings of modern life, wearing a smile he describes as ‘shady’. Behind him lies a half-broken wall, beyond which a pond is being cleaned. He carries a hammer, with blood dripping from it. There’s a lot to take in. But it’s the smile that becomes the focal point of interest. ‘I’m trying to clarify my own thoughts, seeing myself in my paintings,’ he says.

In another, the artist-persona is at the centre of a busy kitchen scene, accosted by a bunch of pigeons. His studio roof is full of them, he says. In yet another, you have a scene from small-town Kerala, populated by RSS men, and CPI workers; daytime tipplers and dutiful mothers; and snarling dogs and half-eaten jackfruits. Ratheesh’s work draws you in with its charm and then makes you look again. Why is the artist-persona covering the woman’s eyes while she catches a scared hog in her torchlight? What’s the story behind the men surrounding him in Saami, one even playfully threatening to set his beard afire? What is the skeleton triptych – here entangled in leaves, there surrounded by construction rods – in Maranan all about? 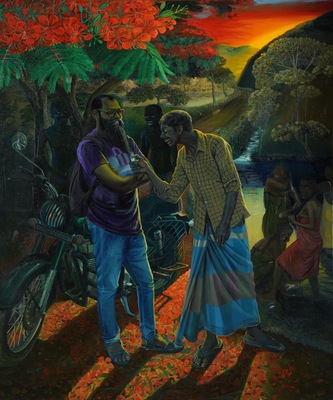 The most breathtaking of his images uses simple imagery to achieve rather stunning effects. The artist-persona and his little daughter exchange a kiss, standing by a pond. There are white flowers everywhere – jasmine that you can practically smell, in a kind of paradise that could be mistaken for a Mughal garden. It’s an image inspired from a pond close to Ratheesh’s Trivandrum home.

In a way, all the paintings explore the idea of exchange. Whether it’s between people, people and nature or people and things. As a viewer, one can jump into the frame quite easily, thanks in part to the size of the works. But the artist captures an unfolding experience, never fixing the ‘meaning’ of the moment with a heavy touch. ‘I used to paint from the imagination; now I paint what’s in front of me,’ the artist of lush greens and evocative browns says. Standing in front of Ratheesh’s paintings, it is this immediacy and intimacy that invites you to look longer, dig deeper and think harder.

Rehana Munir is an independent writer based in Mumbai.