A sensory journey remembering Babu Khan, the greatest kite maker of India, and the legacy he left behind

The 18th century Jal Mahal in Jaipur rises from the middle of the mirror-flat waters of the sprawling Man Sagar Lake in a most ethereal manner, giving regulars and visitors hanging by the corniche something to sigh about on a daily basis. A mere glimpse of it can put the urban stress of the city to ease. Pushy traders try to distract one with puppets and toys, and the commercial hustle of snacks and ice creams sets the place abuzz. But so stunning is the structure that it is easy to fix your gaze to the island palace and stay adrift.

Located just behind the lake and its divine occupant are the Karballa Grounds, a stimulating contrast to the time-stopping tranquility. Here, something else brews, even in the blazing heat of the afternoon. One is welcomed by the sound of a roaring ‘ouuuutttt’ long before setting foot on the dusty expanse, which lies in the snug embrace of crumbling, plaster-less walls of lower income group homes. Garbage mounds lie as toppings on the pale, grass-less makeshift cricket pitch for youngsters. Undeterred by the severe hand of the sun, games ensue and decisions are yelled with gusto. 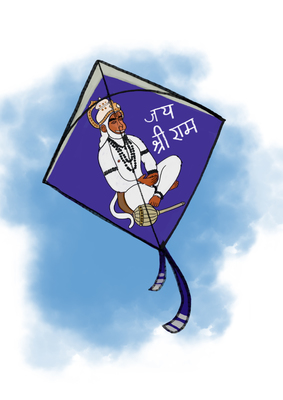 Illustrations by LA Digital Art Studio, based on photographs by Supriya Sehgal.

One such stifling afternoon in May, I found myself standing at the mouth of the field, just where the tennis ball had rolled in for a ‘four’. Though impressed by the athleticism Indian boys naturally muster for cricket, no matter what the weather, I was there to find a different troupe of sportsmen.

To my left, at the far end of the amoeba-shaped field, a group of six elders stood, looking up at the cloudless sky. Shading their eyes with the flat of their palms, necks craned skywards, they were startled to see an unlikely visitor when their gaze dropped. The dual confusion was settled when I told them that I was looking for the patang dangal (kite playgrounds), and they explained their posture; they were gauging wind patterns.Amused that someone had come to explore the art of kite flying in Jaipur, out of season, they ribbed on my ‘big city’ intolerance towards non-air conditioned places and asked me to stand in the shade till they started their daily ritual.  But I smiled politely, and spilled my questions without wasting any minutes.Were they regulars? How many clubs were there in Jaipur? How many people to each club? When did they practice? When were the annual competitions? Did they make money? Was there any betting? What was the biggest championship? And who out of them possessed Babu Khan’s kites? The last question triggered a smile on several lips. 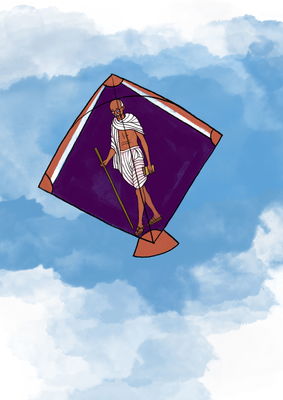 Illustrations by LA Digital Art Studio, based on photographs by Supriya Sehgal.

On the floor, close to their feet, lay large, flat, squarish suitcases, hoarding their most prized possessions – the kites. The eldest gentleman, Rafiq, flipped open his case and let the label of ‘Babu Khan’ peer at me. We all bent down on our haunches around the suitcase and inspected the artistry of not one, but about 10 handmade kites – each with a unique design. Soon, more men joined the group. Some boys even left the riveting cricket game midway and circled around us. Rafiq spoke passionately about the master craftsman with reverence. Appreciation poured in from others in the group. Most of the elders had flown kites with Babu Khan, and missed his astute skills both creatively and sport wise. Sadly, Khan died in 2014 at the age of 76.

We moved on to the specifics about the kites – ‘addha’ (half) or ‘pauna’ (three-quarters), depending on the size. The strings are specifically sourced from Bareilly. Rafiq and his kite cadre include 150-200 people in Jaipur. These are serious hobbyists in the city who have formed over 12 teams that fight each other every year at the annual competition during Makar Sankranti. On other days, the enthusiasm bides in the form of playground practices in the afternoons, when business in their shops is slow. The daily duels are known as dangal.

Read More: Experience The Taste Of God’s Own Country Through These Exemplary Artworks On Kerala