Short Shorts is Arts Illustrated’s micro-fiction series that borrows from the thousand words through which a picture speaks to create a moment of experiential art. Featured here, from our issue on the theme ‘Who’s the Audience?’, is one such piece based on Pratap SJB Rana’s ‘Busker at the Corner’ series, executed in 2016 when the artist was overwhelmed by the sights of buskers who performed on the streets in the cities he visited in Europe. 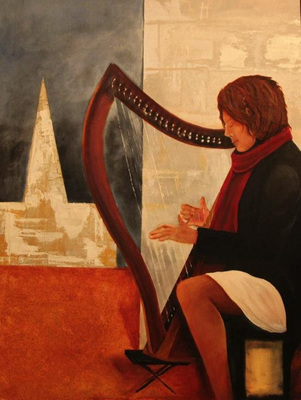 The wind could not blow Payton’s brown hair across her back as the muffler around her neck tightly bound it. Perhaps, she needed that physical tightness to keep her mind from flowing with the music. She was not playing for money. She was celebrating the resurrection of her marriage by plucking at the strings. The sound from the harp were like new waves on the white sand that had, like the others, failed in their climb. When she first met Peter he struck her as someone who seemed like a safe haven, like a bus coming by on a desert trail. He said he would like to know how the fingers that fondled the strings of a harp would feel on his skin.

And that was the beginning of the end of her 11-year-old marriage with Herman. Nearly. She had met him at a party and the first things she noticed were his eyes and lips. And she immediately asked him if he could come and change the logo of her parlour. And Herman realised it did not need any change.

They hit it off and soon got married and had two children. One day, Herman brought Peter home to listen to an evening of music and Peter said, ‘Your music floats in a space between sound and silence.’
Their conversations soon went past music, way beyond when the chords began striking at the possibility of a relationship. It did not take long for Herman to realise that something was seriously wrong. Payton had begun to stay aloof and seldom played the harp at home. She looked unhappy and often suggested a separation. And they did. As Payton’s marriage began ending, her affair too went South. She was losing her children and this man used an expression like ‘this is your problem, not mine’. That shook her up and with each string that she struck, sounds echoed in her mind that stacked up like a pillar of wrongs.  She returned and he opened the doors for her, relieved.

Manoj Nair is a writer, critic, curator and author of Pencil Sketches: a volume of writing on Indian visual arts, cinema, literature and music.
Read More Articles from Arts Illustrated