Short Shorts: Happiness Is A Seat Between Two Wheels With Spokes

Short Shorts is Arts Illustrated’s micro-fiction series that borrows from the thousand words through which a picture speaks to create a moment of experiential art. Featured here, from our issue on the theme ‘Mughal Legacy’, is one such piece based on Upendranath.T.R’s collage artworks that are created layer by layer. A modern miniaturist who works like a medieval master, Upendranath intentionally evades digital enhancements or computer software to create his collage art.

Happiness is shaped like a bicycle, the postmaster told Subramaniam when he gave him the postman’s job and a bicycle with it. That was thirty years ago when he was a desirable young man with just the desire to get things to their destination. Now he was rotund, round-faced with wild, grey hair and a wide smile. That smile had been a staple no matter what the message he carried – whether it was a telegram announcing some bad news; a letter for anxious ones whose kin in uniform was at the front; a money-order that was less than what was expected by the receiver or a letter posted by the dear departed before their bereavement.

Between then and now he had got married, had two children and was just pushing time till he retired. He was lucky to have been posted in Edakulam from the time he had taken up the job and had never been transferred to another place. The job of delivering letters every day without fail for 30 years had given him a resilience that came from managing his emotions, including the unsolicited ones. Therefore, the wide smile. It was the smile that had prompted the girl in the window on his daily route from the post office to the town centre to get past the door and start a life with him happily ever after. Happiness had a seat between two wheels. 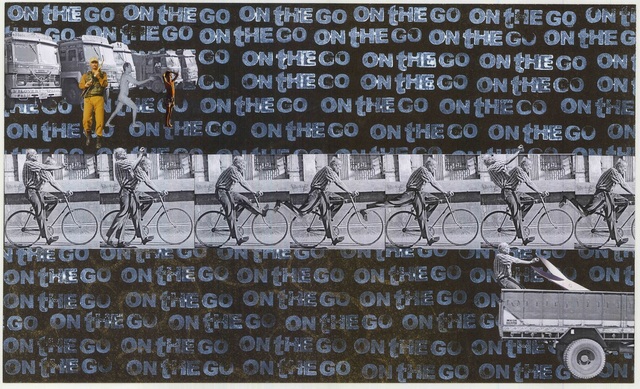 Upendranath.T.R, Untitled from the series All Sorts of Things… And Something Else exhibited in Kashi Art Gallery, 2010, 65 cm x 39 cm. Image Courtesy of the artist.​

But today he was confronted with something that all the years on the cycle had not prepared him for. Or had it? He was staring at a letter addressed to ‘You know who. Guru, the guy with the glasses who is doing research at JNU in Delhi.’ ‘What a shot in the dark,’ Subramaniam raised his eyebrows in disapproval.

‘He is lucky that I have been on the go through the streets and bylanes of the village and know everyone by name. Sure I know him. He lives up there with his wife. But I won’t deliver this letter to his wife at home up there,’ he told himself. I am going to drop it at the cooperative bank where she works on the other side of the village. That was Aripalam at the edge of Edakulam.

So he got on his cycle and hoisted the bag on to his shoulder, and went about quietly with his day till he was left with just the letter for the guy with the glasses.

He dropped it on her desk in the office and left quietly. It seems she had just stepped out for a while. He did not wait to know what the letter’s contents were. Neither anxiety nor any apprehension could smother his trademark smile. He stayed clear of them. And he was right, as there was nothing really to be worried about in the letter. When the wife opened the letter, it just said: ‘If you are reading this it means you are living in a village.’

Manoj Nair is a writer, critic, curator and author of Pencil Sketches: a volume of writing on Indian visual arts, cinema, literature and music.