Artist Subramanian Gopalsamy talks to us about his art, his practice, his inspirations and the journey wherein lies the beauty of it all 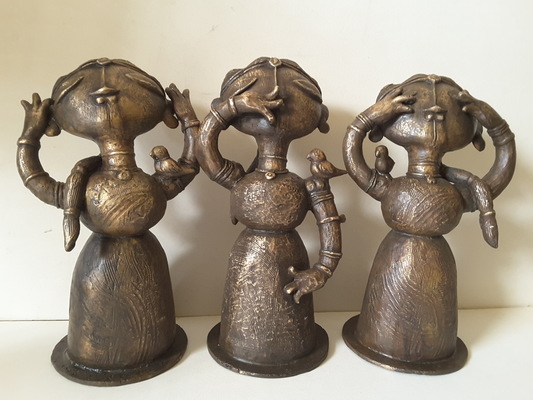 When looking for an artist to create the cover of our issue on the ‘Other Side’, we cast the net far and wide. We were looking for artists who went against the grain, trudged there, where no one’s ever been and found new meanings that redefined the norm. We realised soon enough that we were looking for a needle in the haystack – only it wasn’t a haystack, but a stack of needles. And just as we were about to give up on the quest, we came across artist Subramanian Gopalsamy’s collages – which often depict chubby gods and little girls with large hooded eyes and bright red lips smiling up at you. Sure enough, the colours, the intricate details and the expertise with which they were brought together caught our attention; but what kept it there was the unique approach – especially his recent shift to bronze sculptures that rendered his collages a whole new dimension. His idea for the cover: a chubby, shiny sculpture of Krishna. Like so many before us, we too, misguidedly, viewed religion and tradition as one of two things – something that needs safe-guarding or something that obstructs progress – and were a little hesitant. But Subra (as he is lovingly known) put forth a narrative that celebrated the stories and the child-like innocence and wonder that are invariably tied to them. ‘I never wanted to take it as a serious issue. I am from Thandavankulam, a coastal village in Nagapattinam district. My father was a theatre artist, who performed folk plays. So, this was the theme of my childhood – normal people become mythological characters when they put on makeup. I was brought up around temples, rituals and stories. As a kid, or even after growing up, I never questioned them. It's become a part of life. And, it is beautiful’, he said. 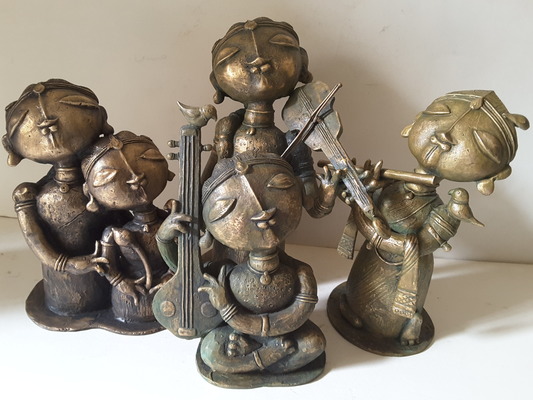 Never one to begrudge others for their greener pastures, Subra found contentment in a practice that unfailingly brings smiles to our faces. In his own honest and charming way, he showed us the journey to the ‘Other Side’ wasn’t a sudden drop down a rabbit hole or an explosive realisation. It could very easily be embedded in the everyday, among the thrill of possibilities or the warmth of acceptance. And to him the polarising concepts of religion or tradition represent just that. ‘We enjoy all festivals, regardless of the religion. Eighteen years in Saudi Arabia, every Ramadan was a great experience. In my flat, a maulvi lived downstairs. I would wake up early in the morning to work on my Inner Life series to the sounds of the maulvi’s morning prayer cassette. It is such a beautiful sound… When I won the Saudia Malwan Award, the prize was a trip to European destinations, I got to visit Rome and Paris and all those places. When I was standing under Michelangelo's work at the Sistine Chapel, I remember being aware that an Islamic country had given an award to a Hindu who was standing in the Sistine Chapel. I remember thinking then, that they are all the same – beautiful’, he said over a telephonic conversation where he took us through his own journey in art – the pits and falls and the rise into, well, beauty. 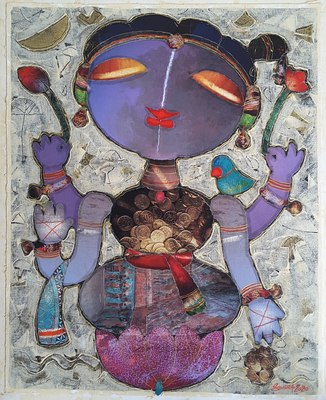 You have said before that loss often leads to new beginnings; and your own journey, after the tragic loss of your daughter, stands testament to the fact. It could not have been an easy journey. Can you let us in on that experience – back when you first found meaning and purpose in art?
This is something that is very close to my heart. I was never a serious painter - especially when I first started. Soon after we moved to Saudi Arabia, my daughter was diagnosed with bone cancer. In the immediate aftermath of her death, when we went back to the Saudi Arabia, our close friends tried their best to help us move one. Every Friday, they would ask me to teach art to their kids. Initially I was at a loss, but soon I started looking forward to it. And the kids, they were mostly girls of my daughter's age – probably girls are more interested in art. I don't know... In watching them work, I learned so many things – how to simplify drawings, colour with ease. It took me so many years to draw like a 9-year-old! 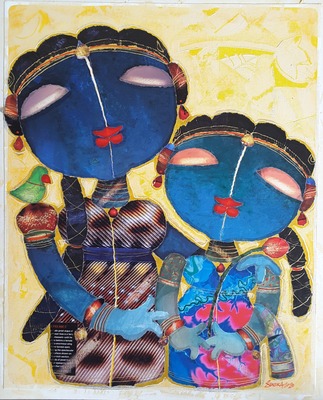 I also like listening to Ramana Maharshi. At that time, I started doing some spiritual work around the Inner Life series – it was all about nature and being connected in a sense. So that was the process, the principle, I was working with. When we came back to India, we were still dealing with the loss, and that is when I started the She series. Whatever I do, she, my daughter, is always in front of me. She becomes a meditating girl, or a singer with a tambura, or I imagine her friends. Then I found that these collages were well received so I kept doing it. In a way, through my art, I am living with my daughter.

Read More: Hang Paintings In Your House For Calming Effect