Watching the dance-theatre performance ‘Bhu|Earth’ is to remember our links to nature, the Earth and the essence of its origin that animates the body beyond time and form. Edited excerpts from the story.

The lights go out. The stage is dark, expectant. It is time for the magicians to take over the world.The scene opens with the slow-moving steps of a dancer, perhaps a warrior? He carries an earthen pot from which smoke billows, his face barely visible, his hair curling into the smoke. He turns his back to the audience and walks down the center as the smoke overtakes the stage like a cosmic memory being invoked. From the left wing, a man rushes in. He is older, perhaps a teacher. The two circle in the smoke as the teacher blows through it and looks out, his eyes questioning and a little amused. Do you remember? He seems to ask a world that has forgotten its own memory. Bhu|Earth is about memory, about Earth, about a memory inside the body which the dancer digs deep into, from where the earth and the universe join in a cosmic unfolding of self-knowledge.

The drumming starts. The scene shifts to a ‘Kalari’ where the warriors are training. There are concentration and intensity of the practice must be flawless. Bare bodies leap and fly, roll and slide over the earth, dust covering their bodies. Their training reaches the crescendo when abruptly a young man leaps into the arena, brazen, angry with the world and hungry for a fight. Dressed in modern clothes, jeans, and sports shoes, he tries to break in, hoping to meet the master who will teach him to be a great warrior and dominate the world. The encounter is fierce till the master appears and stills the scene. Who are you? He asks three times, reducing the angry man to a pulp. 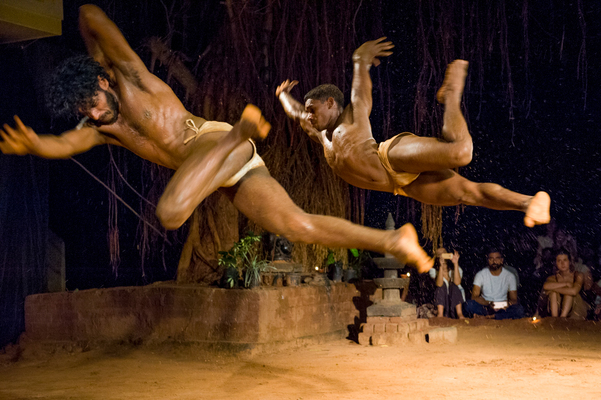 The teaching begins with three imperative commands, stripping the young man of all outer layering: shoes, the T-shirt, and jeans go off. He now stands exposed, all defenses gone. Instead of teaching him combat and aggression, the master warrior drives him within, to a greater connectedness within.

Do you remember, the teacher asks when you were Earth? The young man passes out.

‘Bhu, or Earth, questions the body memory of the dancer, one with earth and Nature,’ says choreographer and artistic director, Philippe Pele Baldini. ‘It is an experimental play that uses both modern theatrical, choreographic tools and the traditional form of Kalaripayattu to create an organic, contemporary work. Connected to the Shakti (primordial or feminine energy) within the body of the Kalaripayattu, this artistic process develops traditional Kalari movement in a contemporary way.’

Together with Thierry Mocazambo, the actor-storyteller, singer, and dancer, in the role of the ‘teacher’, Philippe has worked for thirty-five years on body memories and to find links with nature, Earth and origin. Not historical origin, but of the essence that animates the body beyond time and form.

Anu Majumdar is an award-winning poet and author residing in Pondicherry.

Her Words, Her Weapon

A Handmaid’s Guide to Sanity