Monolithic form taking centre stage, often using bright and multiple colours, layered with intricate patterns are some of the significant features of a typical work of Gond art. In an exclusive interview with Gond artist Bhajju Shyam, we rediscover this art form’s innate connection to nature and the artist’s own roots, deeply embedded within the different colours and textures of the earth

You began your artistic career as an assistant to the noted artist Jhangarh Shyam, also your paternal uncle. At what point did you develop your own language and how did that happen?

I fully credit my uncle for discovering the talent in me. As a child, he saw my drawings and encouraged me to do more. He would give me sheets of paper, colouring pencils and ask me to draw whatever I felt like. Soon I started accompanying him on his travels as his assistant. It was natural for me to mimic his style initially. I was listening to the same stories, using the same set of colours, and was hugely influenced by his style. But again, it is he who guided me to develop my distinctive language. He would tell me to make my drawing but not copy his. That did not come easily to me, but I tried. I also had the distinct opportunity to interact with his collectors and scholars. This provided an additional layer in understanding how they appreciated nuances of the works. Over the years my key differentiator became the way I added detailing and patterns in my paintings. My uncle used the technique of pointillism and I caught on to miniature strokes. Also, the way I approached a human figure, especially the head, was very different from how he drew the head in his works. 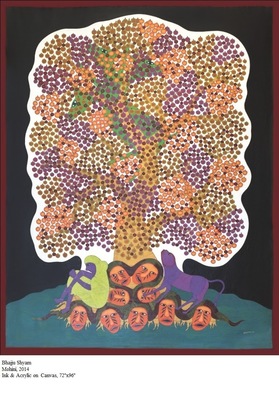 In your experience, how has the iconography of Gond art evolved from the application for domestic decoration to standalone paintings?

Yes, it is true that, traditionally, the women of the family decorated the house by painting on walls. We call it dhigna. My mother and sister did this in our house in the village. But after my sister got married, I helped my mother because she was not tall and could not reach very high, so I finished the top portions of what she created. Traditionally, our palette was very limited. We use around six colours that were made from natural materials like red clay and ochre. And we use a piece of thick cloth to paint with. The walls themselves were uneven. So, the painting on it was rather flat and dull, with a very rudimentary renditioning that lacked finesse. It worked well for the purpose though, which was to decorate the house. But when we started making images as works-of-art on paper and canvas, the very style changed since now we could use of acrylic paints, and the brush and pen allowed for very detailed and repetitive patterns. The basic approach was traditional, but visually the renditioning changed completely. J Swaminathan played a pivotal role in this direction by giving us access to superior quality materials straight away.
The other major deviation was giving title to our works. We saw contemporary artists giving titles that helped in interpreting the works they made. Our wall work was not necessarily based on folk stories, but we realised that our paintings on paper required a ‘concept’ and title. This is when the Gond artists actually began depicting stories through their work. Today, many Gond artists paint the more commonly recognised Hindu god figures like Krishna, for instance, who does not traditionally belong to our community.

Often, your works and that of traditional Gond artists, reference stories from mythology and nature. Please elaborate how these stories are passed on and how you interpret them for your work?

The storytelling tradition is called bana. It is primarily followed by the Pradhan community, to which I belong. Stories are about mythology and the gods, about the courage of kings, and respect for natural elements like the sun and moon, flora and fauna. Many of our rituals are also based on worshiping the tree-god to give us nourishment, the god of the forest to protect us from wild animals while we venture in to collect wood, and so on. When we began to make standalone works-of-art, these stories were easy references to depend on to create a visual imagery. Most often the viewer is able to relate to the story itself on seeing the visual representation, but often we failed. The tradition of storytelling is completely verbal, even in how it is passed on over generations. Nothing is ever written. I am not even literate.

How would you classify your work – is it ethnic, traditional, folk, or contemporary, futuristic? Is it art or craft?

All this classification is for others to decide. What we make on paper and canvas is deeply rooted in our traditions. We reference both our visual and conceptual framework from traditions. Personally, I believe, there is certainly a craft, but how we work now is very individualistic, and there is no reason for this not to be seen as a work of art. That said, there are those who still make repetitive works that is closer to our tradition in many ways. I am not sure if that is art in the true sense. 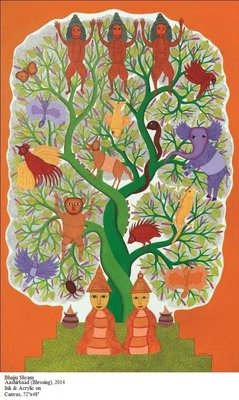 London Jungle Book published by Tara Books was one of your first creations for which you got international recognition. How was the experience of using your skill to make illustrations, something that is considered an applied art-form?

After I came back from London, I had many stories to share. One cannot even imagine my state of mind after that experience. I was someone who had not gone out of my city. I barely sat in a bus, let alone take a flight before this. I still recall how nervous I was. And naïve. For instance, on reaching the airport, there were rows of seats and I sat on one of them. After crossing each step, checking-in, passport control, security, there were similar looking rows of seats. It was dark outside, so nothing was visible. After about three hours, we were sitting in yet another seat of rows, and I finally lost my patience, and asked how long it will take for us to enter the plane. To which I was told, we were already in the plane! That’s how little I knew.
In London, I began to relate to how we lived our lives back in the village. The Big Ben was the time teller there, just the way at home the rooster would announce the rising of the sun. The subway train system felt to me like earthworms criss-crossing the town underground. I was aghast to see women doing work that I believed were reserved for men folk. A waitress writing our order at a restaurant was like a smiling goddess fulfilling our wish list. Hearing these parallels that I had drawn, Tara Books asked me to illustrate them and they came out with the first book. My drawings for the London Jungle Book are rather surrealistic. I have done many books with them after this. It is correct that illustration is bound by the story itself, but then, our art work is also very much based on storytelling. It was not very different for me.