A review of Rajasthan International Folk Festival that was held from October 24 to October 28, 2018 at the Mehrangarh Fort in Jodhpur. 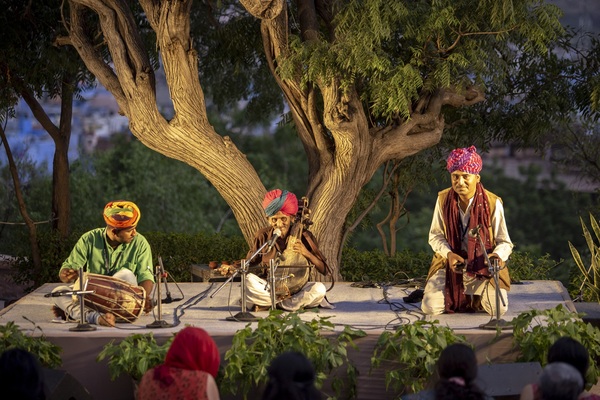 Dapu Khan in performance. Image Courtesy of the Rajasthan International Folk Festival, 2018.
A serendipitous drizzle brought a smile to every face as Dapu Khan Ji explained the meaning of the Miraasi song he was going to sing. He sat beneath a native khejri tree at the Dhana Bhiyan Chhatri courtyard of the Mehrangarh Fort, as the arches of the onion-shaped tomb in front of him lit up in a soft yellow glow. The song was an aching tune set to an old Rajasthani tale of a woman singing about the absence of her husband during the monsoons. Plump raindrops fell on an audience, but the rain forgot to gather momentum – as if in respect for the oldest instrument in the recorded history of Rajasthani folk culture – the kamicha – and its ardent keeper, Dapu Khan Ji. The Living Legends evening at the annual Rajasthan International Folk Festival (RIFF) held at the Mehrangarh Fort gently ushered everyone into the second evening of the festival.
Things had been equally surreal on the first day of the four-day festival, when the Meghwals of Marwar welcomed the dawn at Jaswant Thada and Lakha Khan Manganiyar enthralled everyone with his stamp on the traditional sarangi and folk songs. People were still reeling from the interactive session on the rich musical Sufiyana heritage of Kashmir, but there was no time to take a break. The mind and the heart had a lot to assimilate from the stellar performances through the days.
Each year, five days of October are reserved for the biggest folk festival of India. It was started in 2007, as a not-for-profit partnership between the Mehrangarh Museum Trust and Jaipur Virasat Foundation, under the patronage of HRH Maharaja Gaj Singh. RIFF was started as a platform to promote Rajasthani folk music, and offer a collaborative space with international artistes to create a unique sound for a limited audience.
This year was no different, as the likes of Alif (Kashmir-based music band), Rajasthani bhajan singer Sumitra Devi, Bush Gothic from Australia, Ana Pinhal from Portugal, and musicians from Spain, Reunion Island, the United States and Tehran brought their insignia to the 15th century fort. The setting was equally enthralling as the performances. Especially in the case of the Welsh–Indian storytelling collaboration at Chokelao Garden as its mildly lit arches helped the listener journey from the United Kingdom to Jodhpur in a story led by Angharad Wynne. Equally riveting was the acoustic setting of the ‘Desert Lounge’ in the Rao Jodha Desert Park in a moonlit concert by Sumitra Devi and Mehfil-e-Thar. 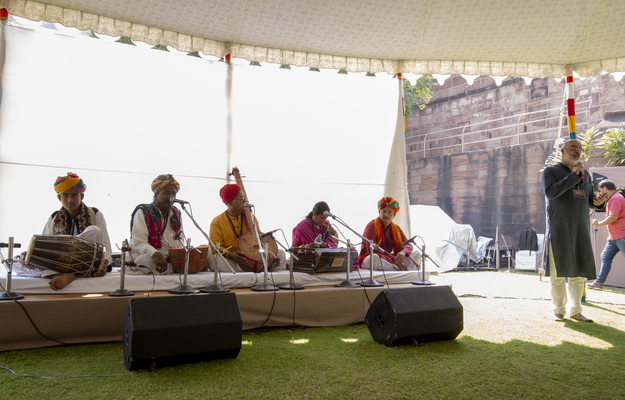 Intercative session, Poetry of Mira Bai. Image Courtesy of the Rajasthan International Folk Festival, 2018.
The headlining event – Rustle – was curated by award-winning percussionist, Gene Peterson.
Together with beat boxer Tom Thummer, and Rajasthani musicians Feroze Khan, Khete Khan and their troupe, he made sure that the Old Zenana courtyard reverberated with unheard of symphonies. The highlights of the performance were a duet between the khartal players with Tom and Gene, and Tiloun Ramoune (Reunion Islands), Teixugueiras (Spain) and Makan Ashgvari (Tehran) returning to the stage to remind the audience that musical boundaries are fluid, unmeasured and unrestricting.
Supriya Sehgal is a serial travel guidebook author with words in over 30 Lonely Planet Guidebooks. Supriya likes to think of herself as a seasoned chronicler of the unusual.

Sculpture By The Sea