The ‘muse’ stands alone but has in its fist the power of creation, or does it? A free-flowing piece on the muse, that solo warrior and guardian of yore, perhaps, and its relevance in contemporary art today. Edited excerpts from the story. 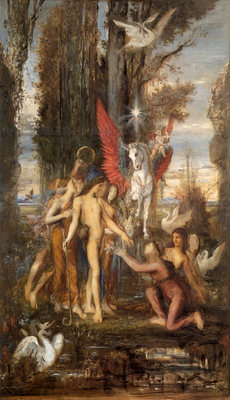 The literal definition of a muse is a person or a personified force that is a source of inspiration for a creative artist. A muse can have a unique place in the artistic process, for making art can be a lonesome endeavour. The term comes from ancient Greece, where, according to legend, the God Zeus had nine daughters known as ‘the muses’. Each had her own specialised goal – one was the inspiration for poetry, another for the harp, one for justice, and one even for astral science. (One notices, though, that none of the nine were focused on the visual arts. An odd omission). Any contemporary contemplation on the muse cannot ignore the seeming misogyny girding this concept – all the nine muses were depicted as young, attractive women. Granted they were given the status and respect of minor goddesses, yet it remains unsettling that women were merely given the role of inspiring the males – gods and otherwise – rather than makers of art themselves.

I am, however, not aware of a comparable construct in Indian aesthetics. We do have a woman as a celestial patron of the arts – the goddess Saraswati. I suppose the male gods were entrusted with more ‘important’ things, like making lightning, thunder, rain, sunlight, and wars. The arts became the responsibility of goddesses who apparently had the time and opportunity for such things. However, in the Indian scheme, goddesses were not merely muses, they had agency – they were makers of art, they played the veena, they danced. It must also be said that in the Indian traditions, the arts had a very special and enabling role, both as purveyors of knowledge and as paths for social and personal upliftment. 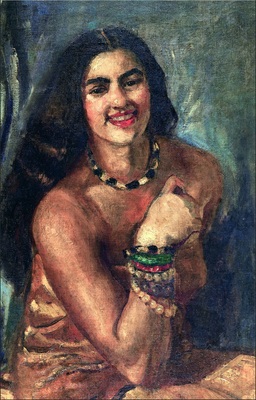 And yet, one cannot ignore a key aspect to muses, which is sexual. In the Western art scene, muses were usually attractive young women, or men, for male artists. Artists like Gaugin and Matisse come to mind and, of course, Picasso, with his infamous record of being inspired by and abusive to his women muses.

While human energy systems provide the basis for many forms of creative effulgence in the human journey – procreation, imagination, invention and innovation – it is important to note that the ‘muse energy’ is not gender privileged. There is little doubt that a man can be as much a muse to a woman artist, as women have seemingly been recognised to be for male artists. Besides, there is evidence of same-sex muses for gay artists.

Artists have always known that inspiration is mysterious – it cannot be easily engineered, willed or demanded. They have spoken about how ideas arrive in surprising, unmediated ways. One mysterious source of inspiration and creative ideas for artists is the dream. This is a dimension beyond our awareness, like our subconscious and the collective stream of consciousness are. While our understanding of these dimensions is quite limited, artists do dip into these dimensions and find ideas – images, stories, events – that are seemingly unconnected with our personal histories. Our muses may lurk in these less understood dimensions of life. This is part of the mystery of the processes of creative inspiration and imagination.
Shakti Maira is an artist and writer based in New Delhi.