Attiq Ahmed has a quiet way of merging two distinct influences – the Mughal Era and the Colonial period – into the aesthetic of his work in furniture design. We delve into his distinctive world of influences that journey from the distant past to his own rapidly changing present. Edited excerpts from the story. 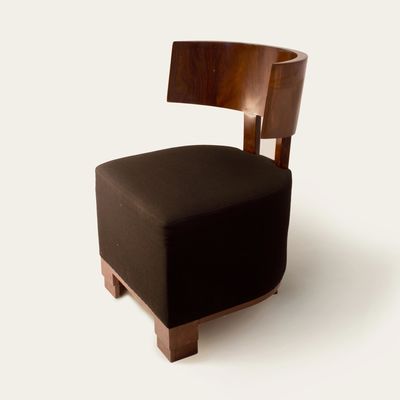 Dumbo Chair in Sheesham. All Images Courtesy of Attiq Ahmed.

All design is based on historical models, on the trials and errors of things that have come before. Apparel design, to which we tend to be more obviously exposed to than others, is the perfect example of this continued reliance of the present on the past. Designing furniture is much the same. The most influential of furniture designs, the styles that come to characterise interiors of certain periods are often gentle tweaks – elaborations or abridgements – of previous styles. Because ‘a chair remains a chair’ at the level of utility through the passage of time, these tweaks are what mark the historical moment at which it is made. In addition, it is also the signifier of its designer’s particular aesthetic. 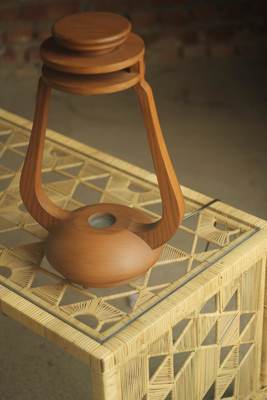 Laaltain lamp atop the wicker table. All Images Courtesy of Attiq Ahmed.

Designer Attiq Uddin Ahmed’s works have often been described as taking ‘cues’ from the Colonial and the Mughal era and thus relies at the very outset on history. Ahmed’s designs are however refreshingly free of the clichés such depiction conjures. The inspiration gathered from these former traditions, he explains, is less at the level of motif and more to do with craftsmanship, with the making of artifacts that can endure the effects of time. Ahmed is an architect by training and has turned to furniture design – a consistent pursuit of architects in the past – only recently. Earlier this year, his 2014 collection for ‘Turning Tables’, his Lahore-based lighting and furniture design studio, earned him the Young Talent mantle at the Indian edition of the Elle Décor International Design Awards.

In our brief e-mail chat we spoke across cities and continents about his reverence for the genius of the past. We touched upon his connection with Lahore, the city that he grew up in, and traced the thumbprints it left across his designs and the way he looked at the world. But, perhaps, most illuminatingly, we spoke about design as a nostalgic experience, the many joys of looking back at what preceded us and the importance of moving forth. 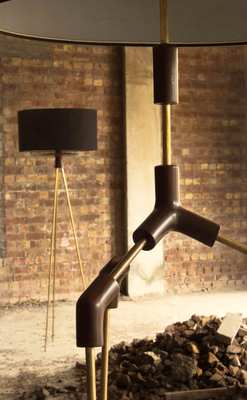 The Alien and Saucer Lamps in tubular brass and shisham sections. All Images Courtesy of Attiq Ahmed.

What role would you say furniture plays in the composition of a space?
Furniture plays as vital a role in establishing the mood of a space and expressing one’s aesthetic as colour. In my own space I like to mix it up and follow no rules for what should and shouldn’t be. It’s always about the proportions of the space, the level of comfort one wants to achieve and the mood one wants to establish.

Would you say your interest in the exterior and the interior of lived spaces is related? Or are the outer and inner extremes of spaces disconnected areas in your mind?
The only boundary separating interiors and exteriors to my mind is the performative aspect of materials and how they’ll be affected by the vagaries of the sun and the rain. Both at ‘Turning Tables’ and at ‘OCCO’, the urban design think tank I lead, the thinking is to see spatial fields as connected and fluid, but disconnected also. If we deconstruct the words ‘lived spaces’ the implication is that these spaces must be accessible and the objects that populate them should be inviting and usable. When designing in the studio, it depends on the task at hand; are we designing an interior or are we working on an urban scheme? In both instances the philosophy that unites them is the aspiration for an inviting environment and soothing ambience. The distinction that separates the inner and outer is far less than a perceived difference based on one’s particular position in a spatial field but rather a fundamental question of weathering. 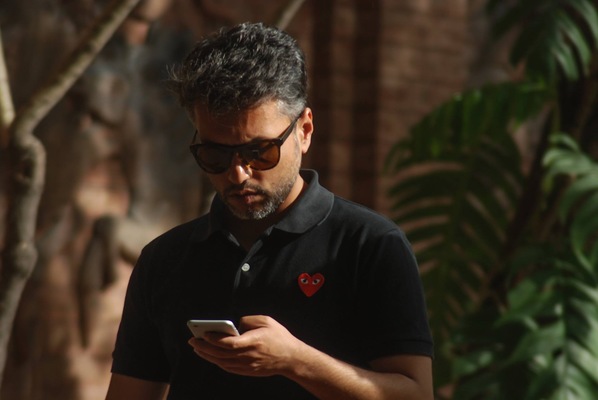 Attiq Ahmed. All Images Courtesy of Attiq Ahmed.
Parni Ray is a writer based in Kolkata. To read the full article, click here.