Artist Seema Kohli takes us through a powerful journey of myth and stories that bring the enigma of influence, identity and roots tantalisingly close, in full colour 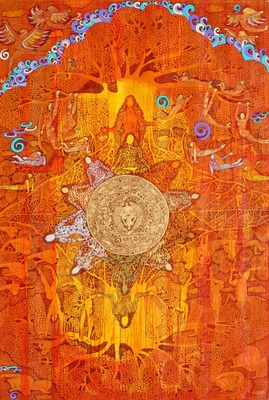 Seema Kohli, Tree of life, Acrylic and ink on canvas with 24ct gold and silver leaf, 2017. Image Courtesy of the Artist.

I belong to a spiritually inclined family of thinkers. Since a very young age, I have reflected upon the questions ‘Who am I and why’, and ‘What am I doing?’ So spirituality to me is all about solving the mystery of understanding yourself, and through my art, I explore questions about our existence, and the meaning and purpose of our lives. Mythology was first introduced to me as unending bedtime tales by my grandfather, huddled together in a rajai in winters with my other siblings. We would fly off to never-ending lands and people that seemed absolutely real with my grandfather’s soft trailing voice. Everything was magical and that made me belive in alchemy. These narratives crossed the boundaries of caste, creed and religion. These stories, to me, were also spiritual, based on the essence of common apathy and self-realisation.
In India, all things – relationships, mythology, faith, our many gods and the eternal quest are very much interrelated. As a child, cuddled on my grandfather’s lap, I was introduced to faith and mythology. They were stories of forgiveness, valour, sacrifices and ultimately sainthood. My love and fascination with and for faith started then. All our actions and deeds are explained in our mythologies, our gods being portrayed as very human and accessible. I had an aunt who would shut her gods in a tin of butter because they did not give her desired results to her prayers, just as we would punish our children for lack of performance in certain exams. This was most hilarious and memorable episode. I realised that everything depended on personal faith, whether it was religion, rituals or gods. 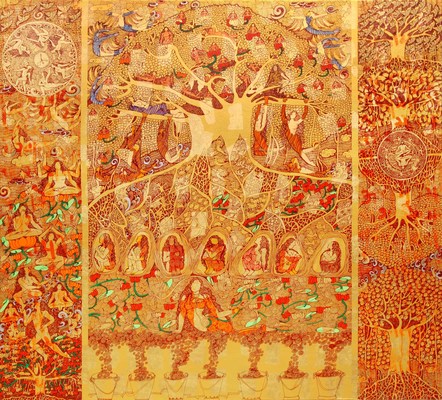 Femme for Life
The feminine energy is to me the reason for all creation, the first womb through which creativity is birthed.

I have always been working on the concept of balance of energies. The yin and yang, male and female as supporting each other. There is not a single element of nature that isn’t a natural compound of these two – that’s what makes creation happen. But about 20 years ago, I stumbled upon the concept of Hiranyagarbha. The myth of Hiranyagarbha as mentioned in the Yajur Veda has captivated me by the following mantra for the past several years. 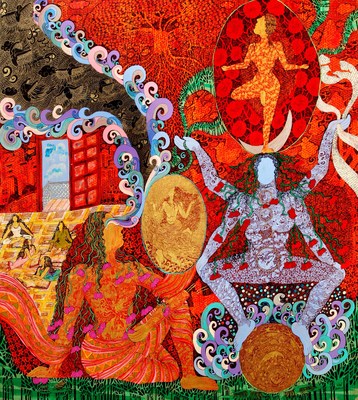 The Hiranyagarbha: the golden egg from which the first seed emerges
tracing the path of prana through the body. And the journey continues
Through fire to air, air to water, water to earth and earth to life.

‘Hiranyagarbha' or ‘Golden Womb’ expressed as the sun in the Yajur Veda is the first eternal womb from which we have emerged. Literally translated, it means that the Golden Womb, which is self-pervading, engulfs every single thing, constantly creating, procreating and positively so. The sun, that up until then I had seen as a male gender, was with a womb. In the course of my research, I understood that it is an amalgamation of both male and female energies.

‘I believe that to explain the manifestation
from one to many,
of  forms, names and a calendar of time
within which each was created
can be attributed to an evocation of these energies.
It is my personal belief that from the mythological form of Ardhanareshwar,
when Parvati disengaged from Shiva,
Shakti gained form and started manifesting as many
or what we call this world.’