Of Lives Lost To Mob Violence - “Most Of My Heroes”

Ever wondered what would be the cost of an innocent life lost to mob violence?

In his recent series, artist Vijay Singh Jodha finds the value to them. The award-winning filmmaker, photographer, and artist pays an unusual tribute to the victims of the anti-Sikh violence in Delhi in 1984 with his exhibition “Most of My Heroes”, on view at Arpana Art Gallery, New Delhi. 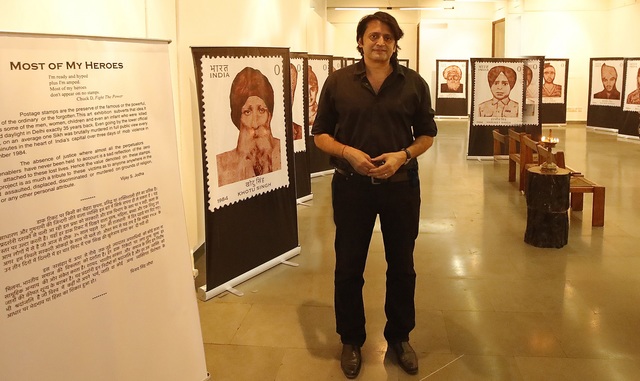 Artist Vijay S Jodha With His Exhibition 'Most Of My Heroes'
Through digitally painted stamps featuring men, women, children and even an infant that were brutally killed by the mobs across Delhi 35 years ago following Prime Minister Indira Gandhi’s assassination Vijay poignantly brings to life the aftermath of the mob violence.
In a first instance, his works may be passed off as giant postage stamps, the idea of which he finds of the “domain of the famous and the powerful”. However as one gets closer the reflection of one of the worst riots of the past century appears.
According to Jodha, “the endless recurrence of mob violence and lack of justice are all reflections of zero value attached to innocent lives that are lost every time.” Thus, one sees Jodha’s stamps carrying the value as ‘zero’.
An alumni of JNU and New York University, Jodha has been expressing himself through films, photography, art, and writings majorly focused around subjects dealing with human rights.
One of his projects has been selected for archiving at OSA Budapest – the world’s premier repository of materials dealing with human rights. His last project – “The First Witnesses” focused on farmer suicides and had five exhibitions across India in 2018-2019.