G Ravinder Reddy is a famous contemporary artist who specializes in sculpture. Born in Suryapet, Andhra Pradesh in the year 1956, Reddy received his education in Fine Arts from Maharaja Sayajirao University, Baroda, specializing in sculptors. Later he did a diploma from Goldsmiths College of Arts, followed by a diploma in ceramics from The Royal College of Arts, London. His work has been showcased all over India and abroad to acclaimed reviews. Reddy took over as the Assistant Director at the Kanoria Centre for Arts, Ahmedabad and held the position from 1984-1990. 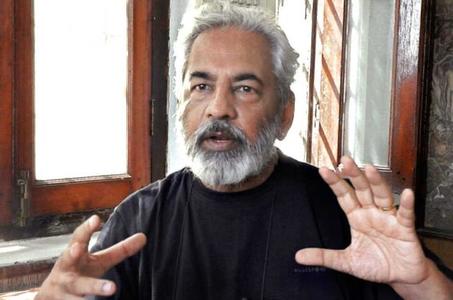 During his tenure, he has inspired and trained many sculptors such as Sudarshan Shetty, and is responsible for making sculpturing the most sought after course in the centre. At present he teaches at the Department of Fine Arts, at Andhra University, Vishakapatanam. Reddy has used various mediums- polyester, resin and fiberglass for his creations coating them with car paint, or gold leaf. His favorite medium remains fiberglass, since according to Reddy, it lends a certain amount of neutrality and the preferred subject has always been the female. The female form according to Reddy gives an artist more space and a freedom of expression.
With the female, one is at more liberty to experiment with different forms, styles colors and textures. According to Reddy, “My life force is women- they are a source of growth and life in my work.” It is because of this attraction and respect for the opposite sex that he elevates the female form to the pedestal of a Goddess by covering it with a gold sheen. Many of his creations have been named after Indian deities. Reddy’s creations are larger than life forms of mainly nude females and colossal heads. They have a frontal stance, looking forward boldly through accentuated widely spaced eyes and elaborate hair styles. There is no coyness in their attitude; the women take on a confrontational posture, their bearing exuding confidence.
Reddy’s work has been inspired by the temple art of South India, wherein the temple precinct and the tall spires are decorated with carved images of Gods and Goddesses. He fuses the traditional Hindu style with a more contemporary one, based on pop and folk art. His works reflects the contemporary woman, one who is traditional at heart, but is also aware of her sensuality and stands proud and tall in the modern world.
In the simplicity of his sculptures with their frontal bearing, Reddy has also integrated styles from ancient civilizations such as the Greek, Egyptian and the Central American. The nude and voluptuous woman in Reddy’s early works, The Woman (1995) and The Woman Holding her Breasts (1998) is suggestive of the Apsaras, Yakshis and divine damsels from Indian folklore. Inspiration from religious images is visible in works such as Under the Tree (1998), Family (1997) and Sitting Woman (1997). His more recent sculptures of female heads leave a lasting impression with their gigantic heads, huge eyes, painted mouths and faces using bright colors reminiscent of kitsch art.
Reddy’s work has found a number of followers and admirers and his art is on display in many private and public collections, such as the Virginia Museum of Fine Arts in Richmond, Victoria, the Albert Museum in London and the Queensland Art Gallery in Brisbane. Reddy has had a number of solo and group exhibitions in India and abroad. He received rave reviews in Paris for his recently displayed collection Tara. An exhibition titled Migrants was showcased in Brazil recently and he is scheduled for an exposition in Denmark later this year. At a recent auction at Christie’s, one of his sculptures fetched 1.41 crore. Surprisingly, none of his works have been displayed in his home state, Andhra Pradesh. He has been the recipient of a number of awards- the Lalit Kala Academy Award for sculptures, the National Academy Award, The Sanskriti Award from the Sanskriti Prathisthan, New Delhi, to name a few. He has also received junior and senior fellowships from the Department of Culture, Government of India in the years 1991-93 and 1995-98 respectively Rolex Watches.