Arpita Singh’ paintings are vibrant and energetic; her work is dominated by blues and pinks and pulsates with life. Arpita born in Bara Nagar, now a part of Bangladesh, in the year 1937 received her education from the Delhi Polytechnic. She passed out with a Diploma in Fine Arts in 1959. After her graduation, she took on a job with the Cottage Industries Restoration Program, a body of the Government of India. Her job entailed interaction with the traditional weavers and artisans from Indian villages. This exposure to different forms had a major influence on her style. In the 70’, her paintings were black and white abstracts done with pen and ink. In 1972, she had her first solo exhibition at the Chemould Gallery, New Delhi and has exhibited regularly ever since. Soon Arpita started using color in a rather restrained way. By the end of the decade, her paintings blended the abstract with the figurative. Figures and Flowers painted in 1971 depicts a rather chaotic world inhabited with floating figures. 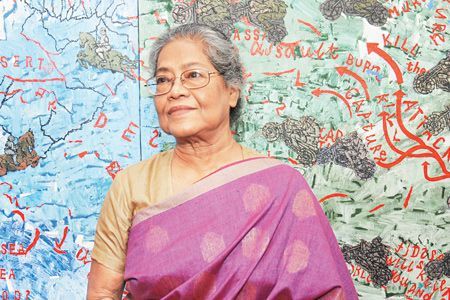 Described as a figurative artist and a modernist, Arpita’s work incorporates traditional Indian art forms and styles such as different types of folk art and miniaturist paintings. Her early paintings were mainly water colors on paper. By the 80’s, the theme of women became a part of many of her paintings which were distinctly based on Bengali folk art. The paintings should be seen from the standpoint of the woman encircled and cocooned within her own home. Her canvas became crowded with images of domestic objects that one is surrounded with every day. Trees, flowers, flower vases, animals, teapots, pillows, festoons and flags make an appearance in her paintings along with women who live charmed domestic lives going about their daily tasks and routines. Child Bride with Swan (1985) and Girl Smoking Cigarette (1985) are examples of her protagonists, leading uncomplicated lives.
In the 90’s, there was a dramatic shift in her style when she started using oil on canvas. Most of Arpita’s paintings remained female-centric and portray the woman’s point of view about her life in India. The gamut of emotions depicted in her oeuvres range from sorrow to joy and suffering to hope. Underlying the images she creates, is a commentary on the problems faced by the contemporary woman and the girl child in today’s society, social injustice and violence. In some of her paintings the women appear nude. Her paintings however, do not have sexual overtones but reflect the woman’s vulnerability. All her paintings have a story to tell but even so, it would be an understatement to call her work narrative.
Violence that reared its head on the national and international scene slowly found its way onto Arpita’s canvas as seen in The White Chair (1983), The series on Ayesha Kidwai, Durga (1993), My Mother (1993) and A Dead Man on the Street: is It You, Krishna (1994). The assassination of Indira Gandhi, the Indian prime Minister, the anti-Sikh riots of 1984, communal riots and the Gulf War struck an echo in the work of Arpita. Images of hostility, aggression and death were reflected in motifs such as guns, knives, cars and planes, soldiers, killers and corpses which permeated her canvases. These symbols of violence intrude into one’s privacy creating a feeling of uncertainty. Women were particularly shown at the receiving end of this brutality. Over the years Arpita’s woman has matured, the young girl has been replaced by an older one. The female form has an aging body with a heightened sexual desire. The latent sexual tension is clearly visible between the two; middle aged women protagonists seen in her work of 1989, Women Watching a Plane.
Arpita has won several awards throughout her career. They include the All India Drawing Exhibition held in Chandigarh in 1981-82, The Algeria Biennale in 1987 and the Parishad Samman from the Sahitya Kala Parishad, New Delhi in 1991. She has over 20 solo exhibitions to her credit; the major one’s being the Drawing 94 held at Gallery Espace, New Delhi in 1994, Memory Jars at Bose Pacia Modern, New York in 2003; Picture Postcard 2003-2006 held at Vadhera Art Gallery, New Delhi in 2006; and has participated in almost 50 group exhibitions. Her piece of work, a unique oil-on-canvas Wish Dream, sold for Rupees 9.6 crore (2.4 million dollars) in December 2011. It comprises of 16 individual canvases about 287x159 inches. It is a large work for an artist who has not produced too many paintings in her lifetime thereby making it a rare collector’s item.