A review of the show ‘Melancholy State of Happiness’, that featured the works of artist Rekha Rao Hebbar. The exhibition was held from July 13 to August 4, 2019 at Saanchi Art Gallery in Bengaluru. 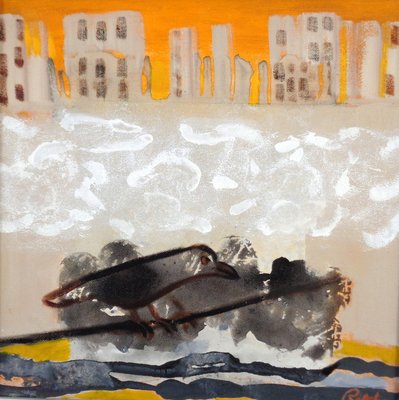 The paintings have quasi abstract appearance delineated in a freewheeling style that may appear naïve and simple, yet are painted subjective expressions of Bengaluru-based artist Rekha Rao Hebbar, and relates to her meditation on the depletion of the urban environment of her city. A nationally acclaimed artist, she lives in a suburb working and creating in the quietitude of her nest. But to her dismay, the meditative silence of her neighbourhood was disrupted by the growth of a concrete jungle that brought many changes, the most vital being the loss of ground water. As a thinking, sensitive and intelligent artist, her anxiety for the loss of vital elements in her environment caused by the destructive attitude of civilisation remains at the heart of her works, an attitude and approach inspired by her father, the eminent modern Indian artist K.K. Hebbar. 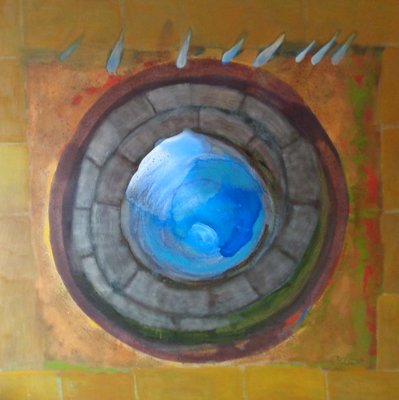 In her recent set of works titled Melancholy State of Happiness, an exhibition held at Saanchi Art Gallery, BIC, Bengaluru, Rekha establishes the dystopia of society and environment, hoping for a return of harmony between man and nature. In her interface with the city’s environs, relating to distressing exploitation of natural resources, particularly water with unplanned urban developments, unmitigated pollution from factories, affluent waste affecting water resources and population explosion, have become protagonists for her deeply felt expressions.

In her visualization, she has engaged with a language of quasi -abstraction that invests her frames with expressive powers, with strident resonant colours, clarifying her angst and distress.  The kitschy colours have a subversive quality that defines the anthropocene effects of human activity having dominantly influenced climatic and environmental changes. As a brilliant colourist, the raw colours are thus provocative in evoking a sensitive response from the viewer. The manipulative brush strokes, both fluid and strident, convey her sentiments.  A naive spontaneity characterises her works, which in its simplicity gives rise to a forest of thoughts on purposive meditation of the environment. Her transparent layering is conceptually ordained to push the idea of fluid time as ever changing and hence permanent loss if not contained. 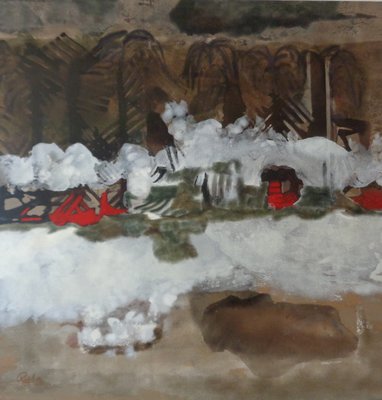 The omniscient light emerging from within the heart of her paintings establishes the melancholic state of a concerned mind. The textures created through resistant technique translate as a metaphor of the changing textures of the geography of Mother Earth.
Dr. Ashrafi S Bhagat is an art historian, art critic and independent curator based in Chennai.