‘Hello Farmaaish’, which premiered in Chennai as part of The Hindu Theatre Fest, unfolds as a play, but in its soul and spirit, is a fantastically crafted game of hope, aspirations, imagination, resilience, freedom and sisterhood. Edited excerpts from the story. 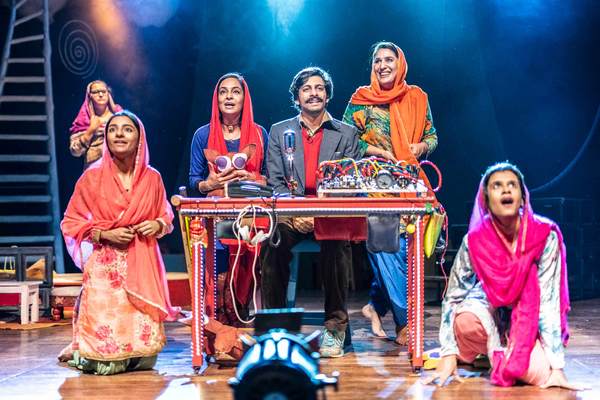 Photographs from the production Hello Farmaaish.
Don’t judge me for being a feminist! Or, I wonder if it is because I still remember – and rather vividly – the twelve-hour labour leading up to the birth of my child, even after a full five years? Either ways, I simply can’t get over this one scene in Dur Se Brothers’ Hello Farmaaish, where Gyan Gita transports her listeners (on radio) – and the audience – to a planet where a husband and a wife are playing a cricket match that will determine, as Gyan Gita narrates rather dramatically, as the lights dim on stage and yellow lights shine and sparkle like stars, who will get pregnant and bear a child.
The woman wins – yay – and gets the man pregnant. And how! She starts tickling him until his balls become the size of his body and finally, with the wife vehemently nudging him to push harder, a baby tumbles out. ‘Didi, ladka hua ya ladki?’ (Is it a boy or a girl?), one of the girls at the NGO asks Gitaji with overwhelming enthusiasm. ‘We don’t know; in this planet, the child grows up and decides if it wants to be a man or a woman.’ 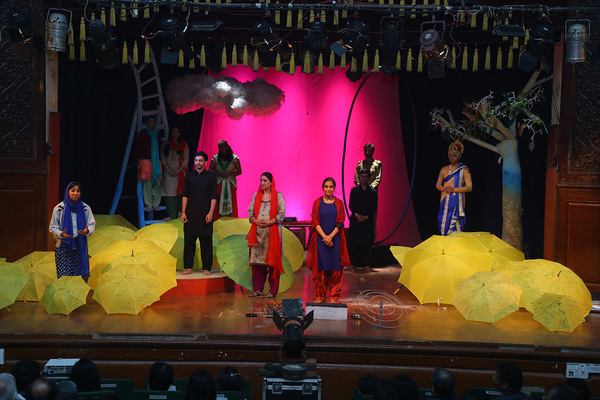 Photographs from the production Hello Farmaaish.
Hello Farmaaish, written by Sneh Sapru and Yuki Ellias, adapted into Hindi by Vidit Tripathi, and directed by Yuki Ellias, which premiered in Chennai as part of the 15th edition of The Hindu Theatre Fest, unfolds as a play, but in its soul and spirit, it is a fantastically crafted game of hope; a game of aspirations, of unabashed imagination, of magic and mystery, of potential and wondrous possibilities, of resilience and resistance, of choice and freedom, of equality and sisterhood.
Hello Farmaaish’s greatest strength is its power to universalise and celebrate the human spirit despite its setting, context, form and language. The characters speak in Hindi tempered with the dialect of Haryana. The game remains in the framework of a board that plays host both to a radio station – a table wherein a contraption of wires intersect loosely – whose radio jockey is a man – and an NGO wherein four women, supervised by an able manager, make stuffed toys that are exported to Denmark. 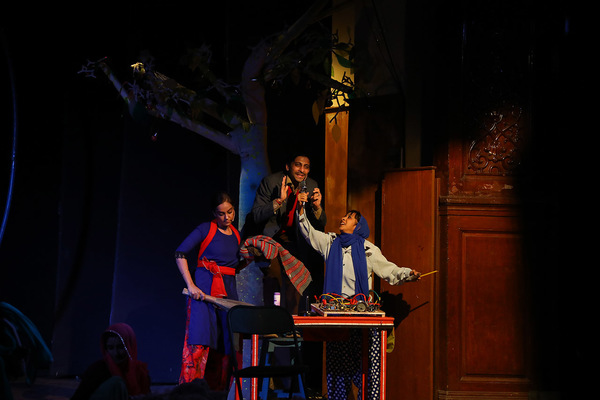 Photographs from the production Hello Farmaaish.
The metaphor of the dolls is amongst our first introductions to the layered nature of the script. One afternoon, taking a short break from her sewing, Minaz – undoubtedly the play’s heroine, who has suffered many a personal setback, but hasn’t lost the spirit of wonder in her eyes and heart – listens to her little black transistor and hears of Kalpana Chawla’s (American astronaut and first woman of Indian descent to go to space) mission to Columbia. That a woman from her own soil (Kalpana had roots in Haryana), has dared to dream, really sets the dice rolling.
Akhila Krishnamurthy is a freelance journalist and an arts entrepreneur based in Chennai.
To read more, click here.