Madras As A Metaphor

A look into the panel discussion on ‘Madras as a Metaphor’ that was held on August 31, 2019 at Art Houz Gallery in Chennai. 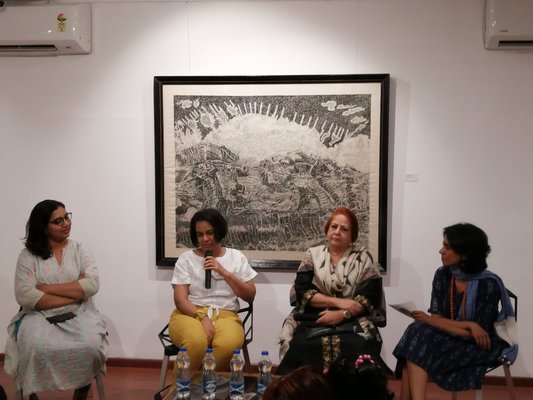 ‘Madras to me is a couple at the Marina beach in the middle of a hot summer day, sundal by day, bajji by night, the clamour of voices that say thanni vandaachu…summer days and naps and waking up to ripe mangoes…’ began Kru, pa Ge, author of the recently released ‘Rivers Remember’ on the Chennai floods of 2015, and this colourful melange of memory immediately gave the audience a strong sense of imagery for the panel discussion on ‘Madras as a metaphor’ recently organised by Arts Illustrated. Set against the backdrop of the group exhibition on drawings at Art Houz Gallery, Chennai, curated by Dr. Ashrafi Bhagat, the panel discussion included Bhagat herself, an art historian and art critic, and Nandini Valli Muthiah, photographer, along with Krupa.

Giving the month of August, now also the month celebrating the city’s birth (Madras Day was on August 22), the perfect ending, the talk began with the choice of the word ‘Madras’ for the sense of nostalgia it brought in, before moving into the panellist’s individual metaphors for the city. In contrast to Krupa’s collage of images, Nandini admitted hers were less ‘rosy’ in nature as her experiences were different, of a city that was often unaccepting of outsiders. ‘For me, Madras has often seemed quite insular,’ she said. While Bhagat, resident of Madras for over six decades, recalled her memories of growing up in George Town, and how unrecognisable the once familiar streets were. ‘Change and transformation would be the metaphors for me, because I feel like I have lived through them,’ she said.

The conversation’s focus then shifted towards what happens to these metaphors in their work as artists, and how imperative it was for the audience’s conscious reception of it as well. While Krupa believed that the interpretation was between the ‘artist, the metaphor and the audience’, Muthiah and Bhagat said that often, due to the lack of awareness and art education, the audience was seldom present. ‘I find that when I go to a gallery for a show, I am often the only one there. We need more people to step out and make time for art,’ said Muthiah. ‘I think the root of the problem is in education,’ added Bhagat, also former Head of the Department, Fine Arts, Stella Maris College. ‘That is where real change can happen.’
The power of what a metaphor can do (or cannot do) kept transforming through the evening, making one wonder how fluid a city can be despite its rigid definitions. When the floor was opened to questions from the audience, a young artist, born and brought up in Madras, asked if given his mixed roots of Tamil and Bengali, he would ever be considered a ‘Madrasi’? In a perfect response to the question, and perhaps the evening itself, Krupa said, ‘You are as Madrasi as you feel you are.’
A big thank you to Ibis Hotels, Chennai, for being our generous food sponsor for the evening.

At Home In The Universe