In India’s folk art traditions, perhaps, lies the secret to the bedrock of our definitions of feminine beauty, and that it began as an innocuous tryst with a set of rules of what constitutes beauty in art 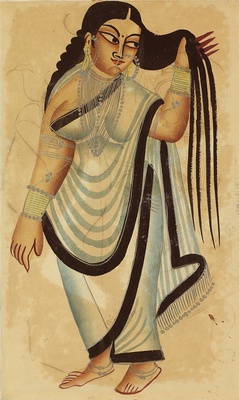 Beside our front door in Edinburgh hangs a small painting of a woman, created in a simple folk style in strong, flat reds, greens and ochre. She fills the board, standing sideways with her body swaying in a graceful ‘S’ shape, curving from the tiny waist. The artist has hinted at jewellery at her crown, neck and wrists. She has exaggerated almond eyes, red lips and the soles of her feet and palms of her uplifted, graceful hands are hennaed. The painting is by Bengali artist Jamini Roy. Graduating from Art College in 1908, Roy soon abandoned his conventional European-style training. In a conscious search for the cultural traditions of his homeland, he switched to the Kalighat idiom, a style of folk painting in bold, sweeping strokes and monochromatic colours that originated in Kolkata in the mid-1800s. Many of his paintings feature dancing women, brides, and mother and child compositions. In their extreme simplification, they were utterly different in style from the work of his contemporaries, yet his unique aesthetic was resolutely Indian, surprising viewers with its sensuousness and visual language. Not only was Roy reaching back to the folk traditions of the previous century, he was glorifying in a representation of beauty and the sensuous bodily form that has been a central feature of the Indian artistic tradition for hundreds of years. 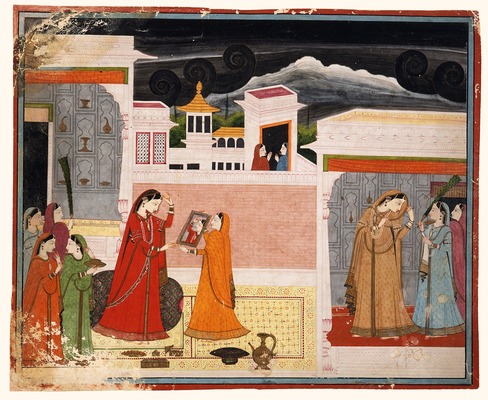 Damayanti Looks in the Mirror, Folio from a Nala-Damayanti, Opaque watercolour and gold on paper, ca. 1790 From the Nasli and Alice Heeramaneck Collection, Museum Associates Purchase (M.83.105.6). Los Angeles County Museum of Art.

The arts of India have consistently celebrated the beauty of the human body. The body was hailed as the epitome of manifested perfection and beauty was an essential aspect of the divine. Vedic literature gives many examples of how beauty and its adornment were visualised, and, as was common in this period, ideas of beauty and how beauty should be represented in the arts were codified.

Artists were guided by theories of painting described in the Chitrasutra of the 2,000-year-old Vishnudharmottara Purana. Detailing the materials required and the techniques of preparation and application, the Chitrasutra outlined the aesthetic elements the painter must employ, merits such as sweetness of execution, symmetry and the deportment of the figure, whilst noting defects such as coarseness of line work, inharmonious colours and lifeless portrayal. To ensure his or her work was deemed complete, the artist had to follow six rules or shadanga. 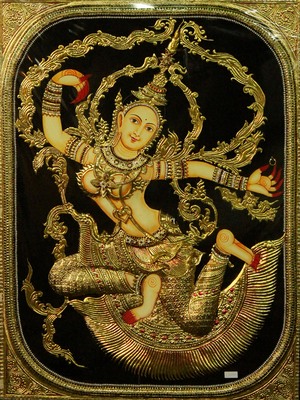 The first rule concerned rupa, or the outer form of the subject. The artist should know the special characteristics of the subject matter of the painting, whether male, female, flora or fauna. Pramanani, meaning harmony, scale and proportion, covered the shape and ratio of the figure. Bhava, or emotion, as expressed by the subject through the eyes, face, stance and gesture was the third shadanga. Without bhava the figure would have no life. The elements of the natural world that surrounded the subject also expressed bhava, as did colour. Lavanya or grace represented the fourth rule. This controlled pramanani and bhava in a subtle manner to ensure a sense of beauty. The fifth rule concerned sadrisyam or similitude, and is better understood as meaning resemblance or comparison of the various parts of the figure with different elements of nature. So the eyes were to be shaped like a fish, or those of a deer; the locks of hair were compared to a snake, and the lips were like rose petals. Varna, meaning colour, was the sixth shadanga. Varna encompassed the colours and pigments that denote the figure, whether naturalistic tones of nature or symbolic colours such as the blue skin of Vishnu.

As beauty was perceived as the manifestation of the Supreme, so the adornment of beauty was seen as service rendered to Him. Self-adornment was not simply an aesthetic act, but one of ritual, too, and part of daily preparation. A woman who placed a bindi on her forehead and bangles on her wrist, who wore earrings, nose and feet ornaments, and applied vermilion to the parting of her hair and red lac to the soles of her feet was performing rites that helped her attain the highest good.

Read More: Wondering Why You Need A Portfolio? Here Is The Perfect Reason- OnArti