Like a Phoenix rising from its ashes stronger and brighter every time, the Notre-Dame cathedral in Paris continues to inspire awe; even after 800 years

The gargoyle with the Eiffel tower in the backdrop is a classic Parisian postcard that captures a lot of the architectural marvels of the French capital. Sitting atop the Notre-Dame de Paris cathedral, along with an army of several other fantastic beasts, the gargoyle, for centuries, has been playing the purifying role of a monster that digests unclean and wastewater and keeps it away from the walls; while the very cathedral it sits upon survived through the many trials and tribulations of time and history. In the spring of 2019, when a massive fire ravaged the medieval cathedral, it brought immense anguish and anxiety in the people, historians and government officials alike; and propped up questions about the future and what the new façade and the spire would look like. The debate however, was not new to the French people. Notre-Dame was built on a tradition of dismantling, fires and resurgence. But the question remains: would the modern designers pay ode to one of the past facades or would they find a 21st century interpretation for the medieval gothic?

Notre-Dame de Paris at the end of the 19th century. Creative Commons.

Conceived in the 12th century, the cathedral towers over other structures and it took over fifty years for its basic structure to be constructed. The original spire was added in the mid-1220s, to align itself with the contemporary designs of the time. And the final construction was only completed in the 14th century. But even before then, in line with a tradition (curse? jinx?) that would follow it for centuries, the structure had already witnessed a fire. The end of the 18th century, with the end of the French Revolution, left deep marks on the structure. Heavily ransacked and destroyed by those denounced the church power, over twenty statues were destroyed, bells were melted to form canons and the cathedral was reduced to a warehouse. The spire was removed in 1786 and the cathedral remained without one till 1860.
Notre-Dame saw hope and revival when Victor Hugo published The Hunchback of Notre Dame. The book proved successful enough to reignite the love for the gothic in French hearts; and so, began the process of reinstating the church’s reputation as a cultural icon. Sensing this as an opportunity, French architect and author Emmanuel Viollet-le-Duc, a lover of the gothic, strived for 25 years and added a new spire, stained-glass windows, the famous gargoyles that were rumoured to be modelled after Viollet-le-Duc’s mother-in-law, and the sculptures of the Twelve Apostles. By 1864, the cathedral was breathing a new air.  It was this image that resided in the collective memory of the people and brought together years of rebuilding, reconstructions and new visions together. 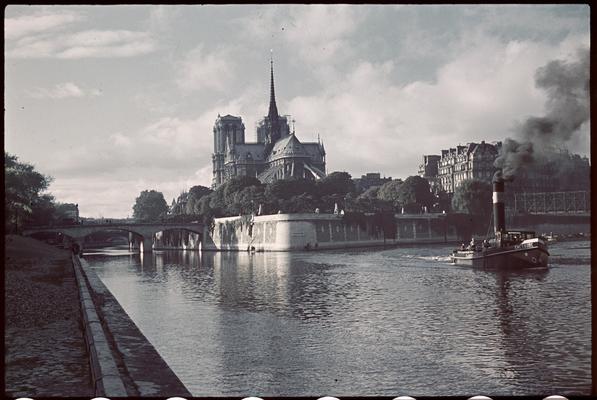 Notre Dame as it stands is a result of continuous ravages and removals; the twentieth century saw the damages of two world wars, addition of newer scaffoldings, electrical wires and deterioration caused by pollution and climate change. But if modern architects and designers are to take away any lesson of the cathedral’s over eight-hundred-year history, then it is that Notre-Dame, as it stands today, is as much a result of innovation, progress and newness, as it is an embodiment of the Phoenix – rising from the ashes every time, stronger and brighter.

Read More: Fine Art Prints Are The Perfect Choice To Decorate Your Rooms!