A look at theatre practitioner, artist and performer Samudra Kajal Saikia’s 2012 Disposable House Project, and why, more than ever today, the dialogue between space and body is vital in understanding the ephemeral – and performative – nature of existence itself. Edited excerpts from the story. 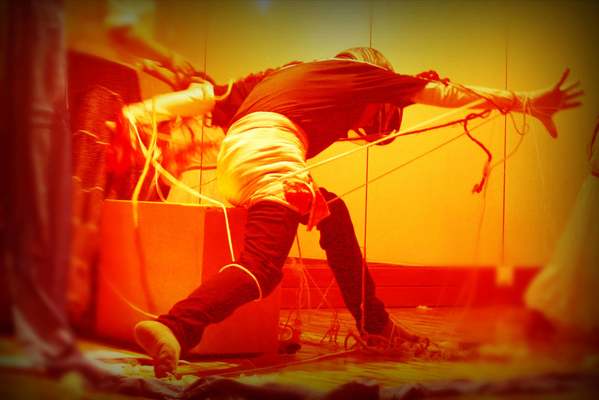 A muppet performance with collaboration, City as Studio program, Sarai.

Every childhood memory makes space for the ‘house-house’ game. You know, the one where the ‘house’ is filled with pockets of imaginary conversation and food, with greetings and goodbyes, and an ocean of time that seems to be going nowhere. Then, one fine day, straight from the capitalist oven, comes irresistible Monopoly, and this ‘house’ now has a shape, a colour and a value. Somewhere along the way, the houses converge, much like memories do, and we cannot distinguish between the two. Conversation changes based on the colour of the house, food changes based on its value and greetings and goodbyes get impossibly stuck, wedged between mezzanine floors and Italian marble. The house settles into our open arms, an embrace that is neither comforting nor constricting. And today, as that house grows bigger and bigger and our hands grow wider and wider, the embrace becoming tighter and tighter, our identities, ideologies and ideals are growing smaller and smaller, quietly slipping through the cracks. Into this volatile vortex of material happiness, artist, theatre-practitioner and performer Samudra Kajal Saikia placed his ‘Disposable House’ project. ‘When the city is shifting constantly, can a concrete building be the settlement for my body? Where does the "dream house" lead you to – when ‘dream’ itself is a moving phenomena?’ he asks. 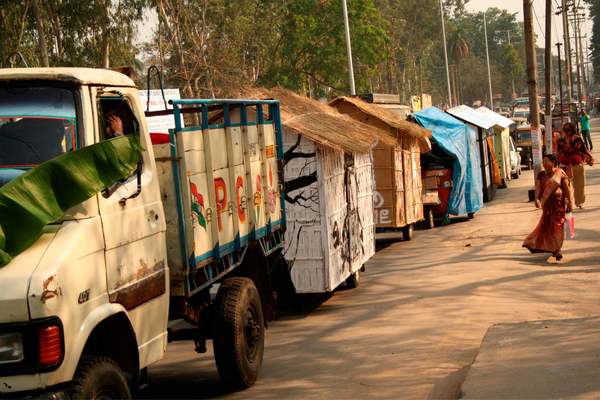 The Mobile Houses on the Street, Guwahati, Assam, 20th Februaty, 2012.

In 2012, five houses that looked straight out of a giant board game, were mounted over tempos, their walls filled with artwork pertaining to specific themes – Sufi house, House of Displacement, Urban House, House of Social Norms and Kankhowa’s House (the body house of the Actor) – and taken on a procession through the streets of Guwahati before stopping by the banks of river Brahmaputra, where they were eventually abandoned. This public art project, funded by FICA public art grant 2010, was a culmination of Samudra’s deep dialogue with the word ‘disposable’ that is, somehow, so many things at the same time – clinical, functional, ephemeral and almost contrite. ‘You are right, it is "so many things at the same time" and really difficult to explain in a line. I do not remember exactly the time I began using this word first and even if I do remember, over a period of time the connotations have changed,’ says Samudra. ‘More than a decade ago, I started executing a one-of-a-kind performance that I called Disposable Theatre. The central argument behind the method was to reclaim the spatial and ephemeral specificity of live art. It was a remonstration against the national, phenomenal and grandiose theatre that used to repeat itself in many "shows" or staging(s). If theatre is live how can it be repeated? So I started doing a theatre that destroyed its own evidences on the spot. This experience took me deeper into the art of performance, which is different from other tactile art. Here, I do not produce a product, object or thing, but I transform my very body into art. As the art is transient, the body itself is another perishable thing. So this single word – disposable – helped me rebel against the thingification of art, to re-connect with certain traditional cultural beliefs, and to find out a work-pattern as well.’ 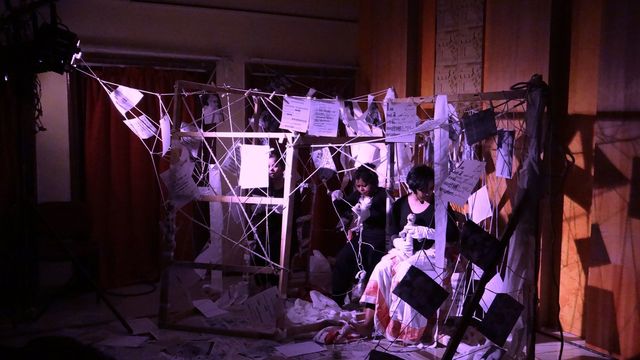 Disposable Womaen, a Disposable Theatre during the Kalaghoda Art Festival, 2015

Praveena Shivram is the Editor of Arts Illustrated.