The Gonds are said to be the largest tribal, or Adivasi Community in India, with a population of nearly 8 million. While a precise history or a date of origin cannot be traced, the community’s roots can be traced back to the pre-Aryan age. Belonging largely to Deccan India, the Gond community has settled in regions spanning across northern Andhra Pradesh, eastern Maharashtra and Madhya Pradesh, Jharkhand and western Orissa. 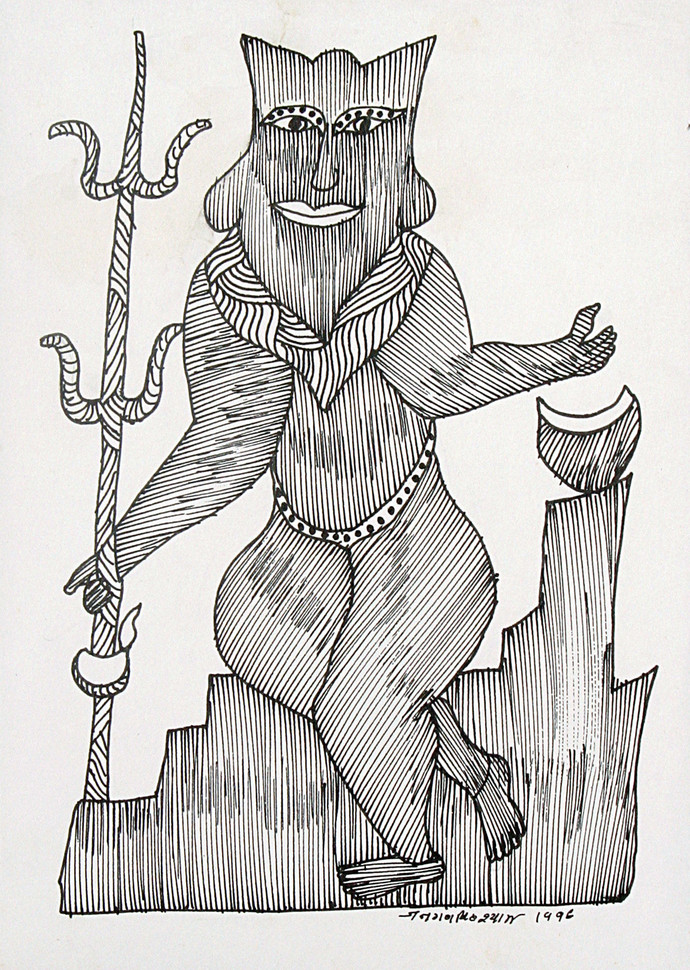 The word Gond comes from Kond, which means green mountains in the Dravidian idiom. Deeply connected with nature and natural elements, Gonds have traditionally drawn inspiration, as well as, represented their stories using strong natural elements. Trees, animals, birds and other environmental representation are probably the most recognizable subject matter in their visual art practice.The Gonds are popularly known for their creative capacities. Even amongst the Gond people, the Pardhan Gonds who traditionally served as priests are popularly considered the most prominent and well renowned for their artistic skills, in painting and even music and performing arts. The Gond community has different forms of art practice entrenched in their everyday lifestyle. They are well known for their visual art, commonly categorized as Gond Art or Gond Paintings. Many artists from the community work professionally in the field, but even amongst those who don’t, a dominant connection to art remains prevalent. 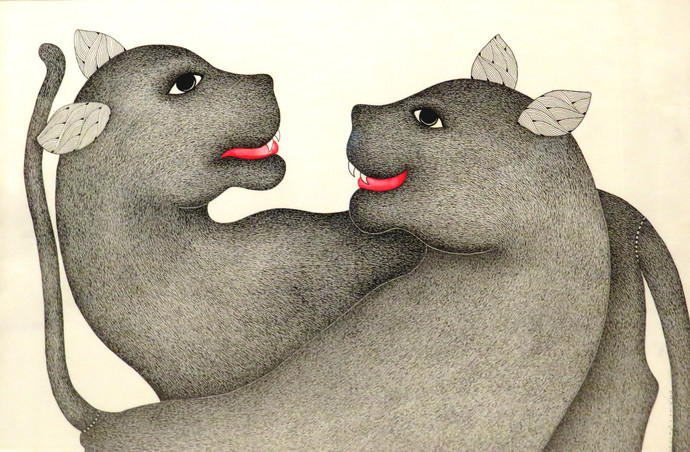 It is a common belief in the Gond community that a good image can earn good luck. This belief is visible in the houses of the community. Brightly painted walls, windows and even floors, replete with traditional icons and motifs are a common sight. Around the early 1980s, certain Pardhan Gonds began transforming and representing their rituals into a new tradition of figurative and narrative visual art while using a variety of modern mediums such as acrylic paint on canvas, ink on paper, silkscreen prints among others. The stunning range of visual narrative depicts a variety of themes and stories. From mythological tales and oral histories to traditional songs, natural surroundings, important events, and rituals, the Gond Artists recreate the past with intense mastery of technique and profound intricacy. Gond paintings are known for their rich detail, bright colours, embedded mystery and a taste of humour. However, these tribal artworks are anything but outdated. Not only do contemporary Gond artists use modern materials and methods but they also brilliantly represent contemporary scenes and concerns while keeping true to age-old traditions and style. 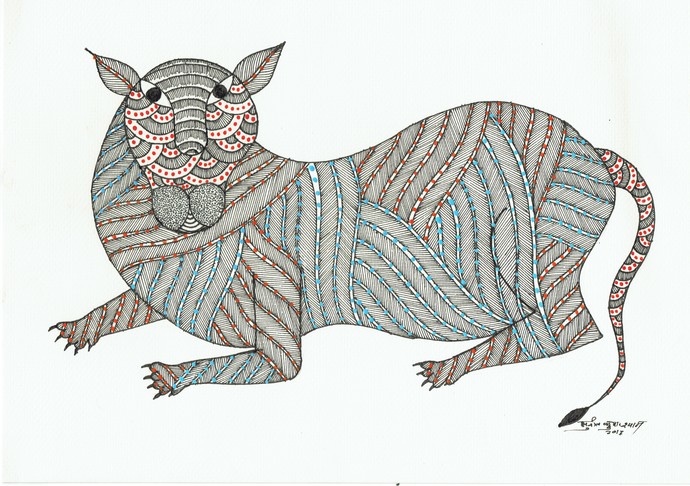 King Of Jungle by Sunil Shyam

Internationally acclaimed Gond Artist Jangarh Singh Shyam is acknowledged as the first Gond artist to use paper and canvas for his art. His talent and vision were so pervasive that he became a celebrated Gond Artist, exhibiting across the country and later was invited to several international art and culture destinations across the globe.

"The main dome of Bharat Bhawan in Bhopal is painted by Jangarh Singh Shyam and depicts the Gond Deity, Baradeo. Jangarh also painted the interiors of the Madhya Pradesh Vidhan Sabha and distributed the fee of Rs.7 lakhs that he received to his fellow artists and the people of his village, despite the fact that he lived in a modest accommodation in Bhopal".

One of the most captivating features of Gond art is its simplicity, both, in terms of the tools required to make the painting, as well as, the painting itself. A canvas or a cloth, or even chart paper along with basic paint is all that is required to start making a Gond painting. The artists first zero-in on a single theme or a simple subject and then begin the process of painting. 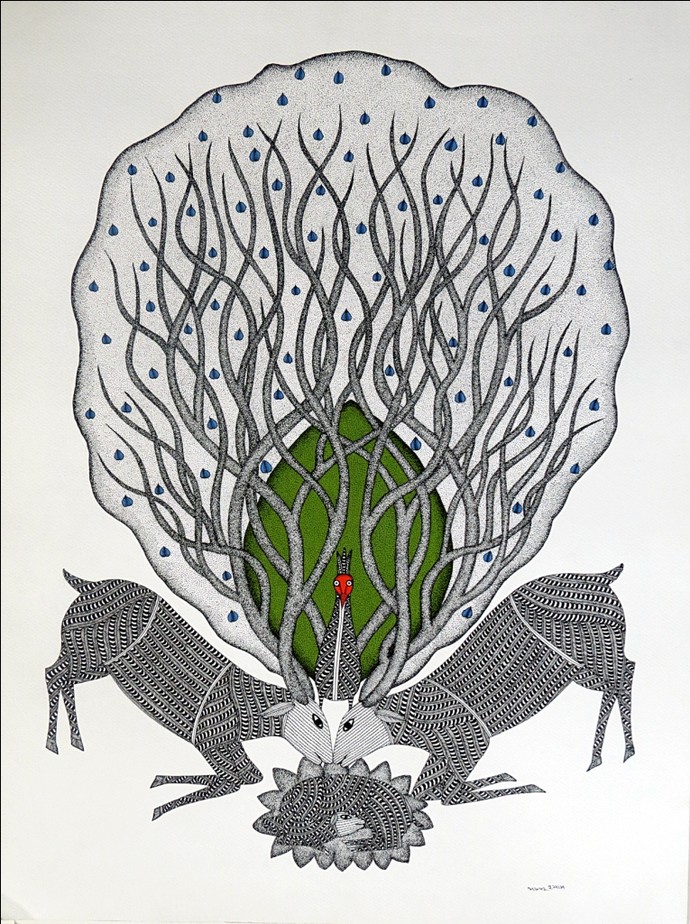 Yet in the simplicity lies incredible intricacy and care. One of the most noticeable and easily recognizable features of Gond painting is the line and dot technique used to create entire paintings. These lines and dots impart a sense of dynamism and movement on the canvas, immediately capturing the attention of its viewers. Paintings are also commonly done on mud walls. Generally, a mix of natural colours is used from earthen materials such as wooden coal, tree sap, red soil, sem leaves and even cow dung.

"A special soil, freely available in local areas, called Pidor is used for preparing the surface of the wall for the painting.

In the modern day and age, Gond paintings are as much part of a rich traditional Indian history as they are in sync with current global trends. Gond Artists are no longer faceless, nameless unknown artists but have made a mark with their own unique individual artistic identities in the global art market. Gond paintings can sell for anywhere between a few thousand rupees to a few lakhs. Gond artists such as Bhajju Shyam, Mangru Uikey, and Durga Bai among others have truly carved a niche for themselves and earned themselves international acclaim. 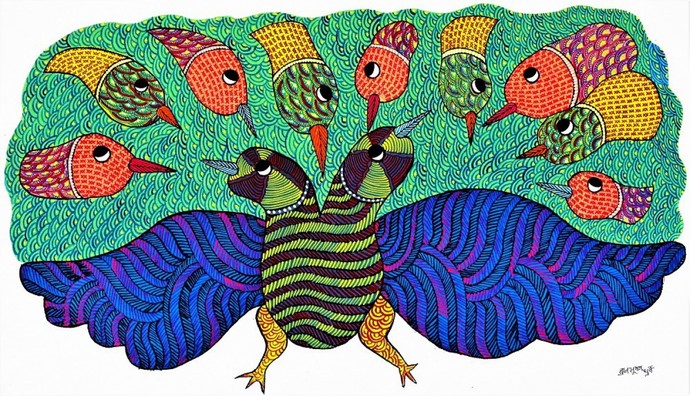 "With globalization, Gond paintings have also become quite common on merchandise and everyday commodities such as cushion covers, wooden trays, and even apparels helping them become more popular".

Gond paintings remain till date one of the most historically entrenched and yet contemporary Indian visual art traditions.Take a tour of our curation on original Gond art by the master artists themselves, now at a click of a button on Mojarto.