Going Against The Grain

Clothing can act as a powerful medium for expressing dissent, asserting political viewpoints and externalising conflict through sartorial cues. Edited excerpts from the story 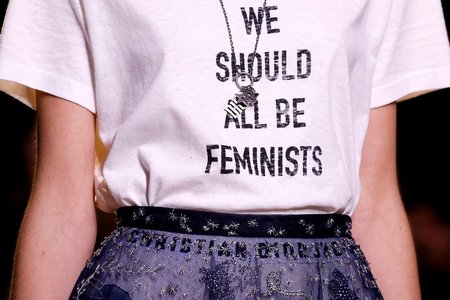 In 1984 when British fashion designer Katharine Hamnett met with the then Prime Minister Margaret Thatcher wearing an oversized T-shirt dress with the slogan ‘58% don’t want Pershing’ printed on it, she was actively voicing her and countless others’ opposition to the stationing of nuclear missiles in the United Kingdom. Hamnett, who had smuggled the T-shirt dress on her person, literally used her clothing and her body as a billboard to express her dissent.

The lasting image of this meeting loses its potency when viewed out of context, especially from our current perspective where oversized T-shirt dresses with bold slogans are the rage and extremely fashionable globally. Yet, countless other examples take its place, where the meaning and metaphors embedded in our sometime ordinary clothing choices become mobilised to create extraordinary outcomes that continue to echo similar sentiments of resistance and conflict.

Just recently, i-D magazine accurately captured the readers’ distraught mental state in response to the US election results through featuring images of Isamaya french’s angsty [sic] styling of body art and clothing – encouraging its followers to ‘wear your beliefs where we can see them’. Urging them in essence to externalise the conflict they were experiencing in the most direct and personal way possible – through and on their bodies.

In contrast to the tone suggested through featuring French’s work, just a few days prior to the US presidential elections many women chose to wear pantsuits to express their hope and support for Democratic nominee Hillary Clinton. In one case, a flash mob of pantsuit wearing dancers gathered together in New York’s Union Square for an uplifting and inspiring performance to Justin Timberlake’s catchy song Can’t Stop the Feeling, thereby allowing the oft-overlooked ordinary corporate pantsuit to take on the role of an extraordinary mantle signifying unity in diversity and hope.

Since fashion is an intrinsic part of all cultures, and dressing and adorning the body for presentation are familiar cultural practices that have evolved over generations, the signs and symbols embedded in these practices are widely and easily (and often subconsciously) understood and appreciated. As a result, sartorial strategies that have evolved over centuries continue to play out in current times, as designers, celebrities, politicians and regular citizens deploy cloth and clothing to collectively express, challenge, promote, mourn or celebrate a variety of causes.

This is especially true in India, where nationalist themes continue to inform contemporary dress and design practices. One such brilliant and effective example was the Aam Aadmi Party’s use of the iconic Gandhi topi (during Delhi’s legislative assembly elections in 2013) as a political symbol for connecting with the common man. While the Gandhi topi was originally made and constructed from khadi, in keeping with the Swadeshi movement, the topis that AAP’s representatives were handing out were mostly made from a recyclable non-woven polypropylene material. Despite the evolution in the materiality of the topi (from woven to non-woven, natural fibres to manmade) its political symbolism and intent had remained intact.

Sometimes, even the subtlest of interventions allow for not so subtle outcomes that unite groups of people actively choosing to go against the grain. For the uninitiated, these may just be fashion fads that largely go unnoticed, but for those in the know it is possible to appreciate how for a moment in time clothing can literally turn our bodies into billboards.

Arti Sandhu is an Associate Professor of Fashion Design at Columbia College Chicago and the author of the book ‘Indian Fashion: Tradition, Innovation, Style’.

The Importance of Being Relevant

A Shot of Reverence

A Tempest of Recurrence