As every architect will grudgingly admit, the final building is the much-needed performance-enhancing drug, sometimes making the humblest of intentions grandiose and monumental – and entirely (and hilariously) out of sync with the function. Edited excerpts from the story. 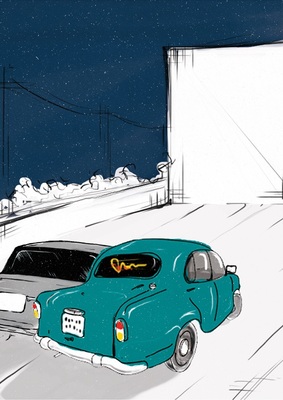 In the early 1980s when I lived in Ahmedabad, I often cycled to work. Along the way, I always noticed a high five-storied wall, standing forlornly in a dusty dry field. The wall, I learnt, was India’s first-ever Drive-In movie theatre. I had no access to a car but decided to spend an evening there, in the hope of getting a taste of the historic moment.

Oddly, the absence of a car did not hinder my entry to the place. Several others – groups of families, office colleagues, students – had all come without a vehicle, but were allowed to sit in the open far back in the field. A couple of Fiats and Ambassadors had parked between us and the screen. The movie began. Blurred by distance, in the swirling dusty field – between the blaring of car horns and an audience regularly relieving themselves in the open – the film remained, from title to finish, in soft focus. It could have been a Russian melodrama, a science fiction thriller or a Bollywood romance; it didn't matter. The Drive-In as a new architectural experience was enough.

Architecture is one of the odd professions that lives by a continuous urge to make a statement. Dentists, surgeons, lawyers, all accomplish their work with ease and efficiency, ensuring that, for the professional fees being charged, their client is satisfied. Architects, instead, use clients merely as props – much like a tailor uses a sewing machine – to launch their own ideas into a project. Sure, the design expressed in the finished building resolves functional requirements, but for the architect, it becomes a professional poster for future work. As every architect will grudgingly admit, the final building is the much-needed performance-enhancing drug.

It is the nature of art to harbour pretensions, and it is in the nature of architecture to expose them wholesale to the public. Art hangs on private walls in a gallery; but buildings are big, always visible, open to scrutiny twenty-four hours a day. The urgency to be original made the owner of a riverbed eatery in Ahmadabad resolve it into a revolving restaurant. It did not matter that the view from high up was of the city’s largest slum on an empty Sabarmati riverbed; the draw was in the very act of revolving; in a profession that relied wholly on position and a settled view, the movement made it unique. Architecture could make the humblest of intentions grandiose and monumental – and entirely out of sync with the function. In Egypt, a nursery school building is designed with the children’s height in mind; adult teachers crouch into classrooms barely five feet high; in Sweden – like it or not – a building with glass pipes forces residents to see all their bodily expulsions travel to the municipal drainage system.

Of course, most projects are so outrageous they remain only on paper. Drawings in private collections show nuclear reactors converted into hospitals, suicide bridges on the Hudson River, fast food restaurants in the shape of a burger, French architect Bouelle’s detailed plans for a penis-shaped brothel and SITE Architects’ version of the garden city as a skyscraper. Every act of architecture was a form of misrepresentation, literal interpretation or excessive exaggeration.  When everyone asserted a private identity, the value of design dimmed. With the clamour of every object seeking its moment in fame, their planned noticeability went unnoticed or became a trivial visual act, temporary and farcical. Easily forgotten.

Gautam Bhatia is an architect, artist and writer based in New Delhi. To read the full article, click here.

What's in a Meme?