The space that ephemeral art occupies in the contemporary art landscape is, unlike its transient nature, a permanent fixture. In a seven-part series, we bring together artists working in this space and the unique relationship they share with their artwork and the world beyond.

Debesh Goswami can probably be described as one of India’s quint essential ephemeral artists. After a Visual Arts degree from Rabindra Bharati University, Kolkata, he went on to complete his PhD in Fine Arts from the Université Rennes II, and continues to teach at the School of Graphic Art, Rennes. His installations, performances and photographs are constantly in a state of dialogue with not just the history of art in its entirety, but also India’s own ant ediluvian culture. Born in 1965, Goswami divides histime between Kolkata and France, bringing a definitive multi-cultural aspect to his work that often deals with the questions of identity, mortality and transience.

Goswami uses a variety of materials such as bread, flowers, clay and pigments for his artworks. He explains, ‘I explore these particular media for the symbolic and active qualities of impermanence they possess. Moreover, I also tryto focus on how particular characteristics of the materials relate to specific themes.’ An example would be the theme of sustenance, in all its many layers, in his installation of bread. 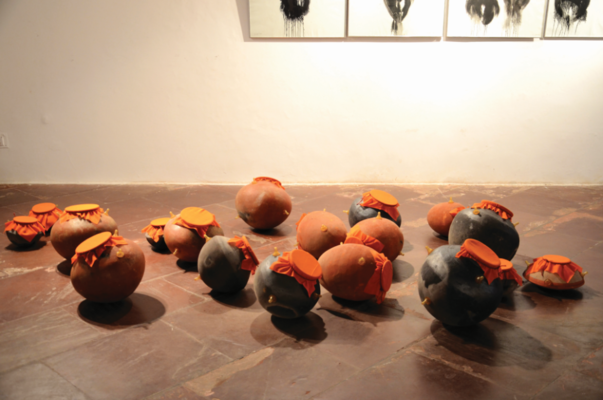 In Goswami’s repertoire, the theme of ephemerality attains surreal allusions. And that is mostly because of the choice of the materials he chooses for his artwork, all of which have the ability to engage, at once, with the literal and the symbolic. ‘Ephemerality is a constant reminder of the mortality of life; we continue and discontinue life. My work too exists only for a brief moment in time,’ he says.

Praveena Shivram is an independent writer based in Chennai.