The space that ephemeral art occupies in the contemporary art landscape is, unlike its transient nature, a permanent fixture. In a seven-part series, we bring together artistsworking in this space and the unique relationship they share with their artwork and the world beyond.

It is tough to separate Liu Bolin the artist from his now famous ‘Invisible Man’ persona. Born in 1973 in Shandong,China, and armed with a BFA from the Shandong College of Arts, Jinan, and an MFA from the CentralAcademy of Arts, Beijing, Bolin began as a sculptor anda photographer, earning his reputation as a contemporary artist of note. That is, till 2005, when the Chinese government had him shut down his studio. Bolin’s ‘Invisible Man’ performance art series was born, as a means of silent protest. ‘Through this project, I found I was able to express some of the injustices and unfair social issues thatoccur as a result of rapid economic development, not just in China, but the whole world. I want to find this kind of social contradictions and show it to the people,’ he says.

Liu_Bolin1 Liu Bolin, Hiding in the city, Cancer Village, 2013. All Images are Courtesy of the Klein Sun Gallery in New York, ©Liu Bolin.

Bolin simply uses his body, mind and soul, literally, intohis artworks. He works by choosing certain specific sites,that is either representative of the city he is displaying his work in, or representative of a particular social issue that he wants to bring to the fore (He read about Venice’simpending disappearance due to global warming, anddecided to “hide” there to bring that fact to people’s attention), and then, with a team of assistants who paint his body, Bolin eventually merges into the landscape. 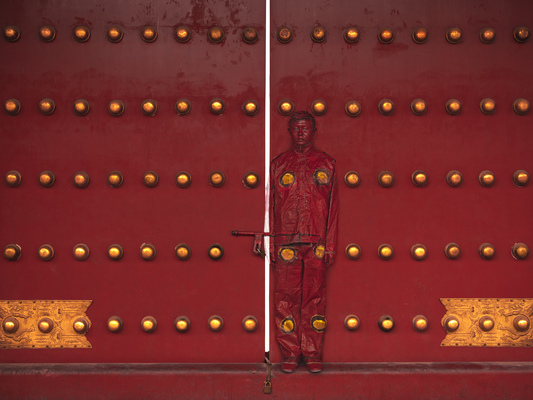 Liu_Bolin2 Liu Bolin, Hiding in the city, Red Door, 2012. All Images are Courtesy of the Klein Sun Gallery in New York, ©Liu Bolin.

Bolin’s genius is not so much in the clever way in which he disappears into the background, but the sites he actually chooses. After the initial euphoria of wonder wears off, there is a deep sense of anguish that you areleft with, and a multitude of hard questions emanating from the space he has chosen, making Bolin’s work standout despite (or maybe precisely because of ) its apparentnon-existence. 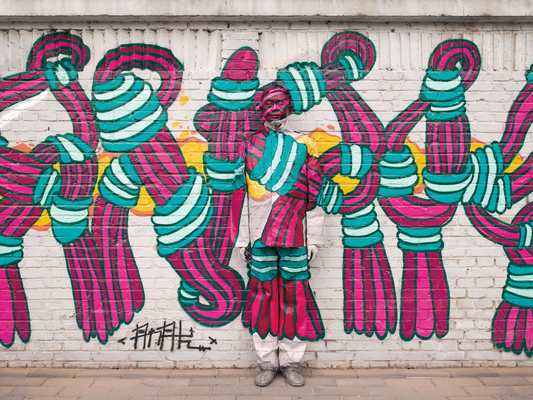 Liu_Bolin3 Liu Bolin, Hiding in the city, Graffiti No.1, 2012. All Images are Courtesy of the Klein Sun Gallery in New York, ©Liu Bolin.

Praveena Shivram is an independent writer based in Chennai.