How often do we come across art that is not just worthwhile but is revolutionary in its consumption? 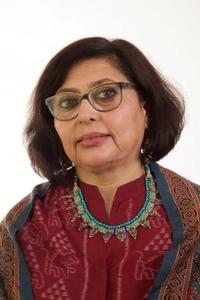 ‘The Khadi March: Just Five Metres’ is a result of Shelly’s pilgrimages to Ajrakhpur over the last three years. Ajrakhpur is a small village, a few kilometres from Bhuj, in Gujarat.

Her exhibition ‘The Khadi March’, showcases artworks ranging from flags and wall hangings to sculptural apparels and installation pieces all made from Khadi.

With an academic background in literature and fashion technology, Jyoti’s tryst with Khadi started almost a decade ago while working on Indigo Narratives (2009-13), an exhibition that explored the plight of Indigo farmers in India through art which eventually led her to study the Champaran Movement and ultimately Gandhiji’s philosophies of non-violence and Swadharma.

“I’m trying to explore the idea of my dharma towards my country”, she says. “The Indian population of which 700 million are living in villages and 300 million in urban areas; the urban population by virtue of buying five meters of Khadi, once a year, as a Swadharma towards your country, create a production demand that is an effortless offering to the spinners, weavers and the handicraft artisans who form a majority of the rural population.This show is about consumption and production of Khadi as a means of self-purification and establishing a connect between the urban and rural population.” 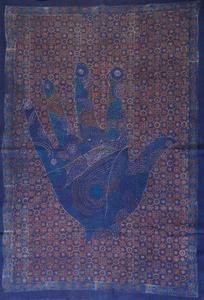 For Jyoti, the thought process of arriving at five meters comes from the basic clothing requirement - for a man 2.5 meters of fabric each for a shirt and trouser and in case of women the standard length of a saree.

Working on Indigo narratives led her to discover Ajrakh, a wood block printing technique that dates back to the Indus Valley civilisation. Ajrakh, literally meaning indigo in Arabic, is a form of block-printing that came to Kutch from Sindh and Balochistan 400 years ago when the Muslim Khatris (artisans who ‘apply colour to cloth’) settled in the village of Dhamadka at the request of the King of Kutch’s demands for handmade textiles. In 2001 a devastating earthquake severely damaged Bhuj, Dhamadka and other villages and towns all over the Kutch region. In the wake of this tragedy, the Khatris were brought closer together and a new village was created to rebuild their lives and their craft production, aptly named Ajrakhpur (‘place of Ajrakh’).

Jyoti explains that Ajrakh is a resist printing technique in which carved wooden blocks are dipped into natural resists, and stamped onto the cloth. “So the design you see stamped will be the one which be lighter in colour once the fabric is dyed.”

Working with ninth generation craftsmen in Bhuj, Jyoti only uses wood blocks that have been used traditionally by the craftsmen over a couple of centuries, incorporating their designs in her conceptual framework. 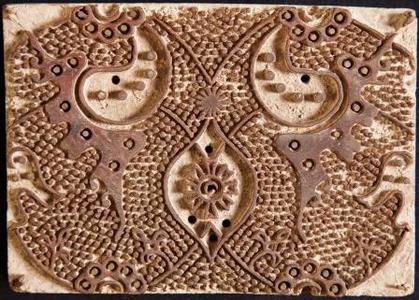 One of Shelly Jyoti’s antique woodblocks

Historical iconographic elements within the cultural context of Indian history have always featured in artworks by Shelly. Motifs such as chakras, charkhas and lotus commonly appear in this series as well.

Despite coming from a fashion background, Shelly attributes the choice of creating artworks over clothes to the shelf life of apparels. “A fabric once block printed is worn and washed it will worn out but an art piece will stay there.”

The connect between urban and rural manifests itself in the form of embellishments in Shelly’s artworks. Shelly Jyoti gives migrant women from Bengal who work as domestic helps in her area opportunities to showcase their kantha stitch skills.

Shelly believes that collaborations between artisans and a visual artist like herself are important for creating awareness and demand for the preservation of such indigenous crafts. “If they do not get that support or recognition from the urban population, it may not be them but their forthcoming generations might move out from there.” 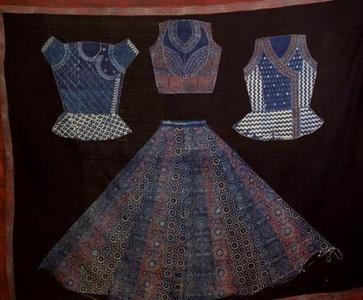 Creating two dimensional and sculptural blouses and Angrakhas in her artworks, Shelly aims to document the fashion of women of the 21st century.

Shelly Jyoti’s exhibition opens on the 20th Oct at the Visual Arts Gallery, India Habitat Centre and remains open till 26th Oct, 2016. Her artworks are available on Mojarto.