Jerry Pinto’s ‘Em and the Big Hoom’ traces the abilities of the mind to create patterns that could only be its own in words that eventually become all of ours. Edited excerpts from the article. 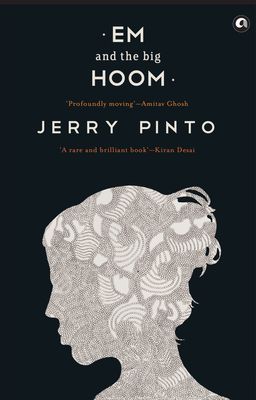 I’ve always thought of the mind as a fascinating creature. It can take flotsam of old memory, pass them through the sieve of time, and reconstruct something quite different from the original. It can also freewheel into the next moment, and to the next and the next, creating entire tapestries of its own design, sometimes comforting and sometimes fearsome. It is a malleable, mutating and marvellous thing, the Mind.

I thought about some of these things the first time I picked up a copy of Jerry Pinto’s Em and the Big Hoom a few years ago. The outline of a woman’s head on the cover, filled with intricate dots, implied something all-consuming; the ability of the mind to create patterns that could only be its own. I was intrigued. Who was this woman and what were the codes of her mind? I was even more intrigued by the title – who was ‘Em’and what on earth was ‘The Big Hoom’?

When I read the book again a second time, very recently, I knew the answers to some of these questions. I knew that Em was the narrator’s mother, Imelda, whose mind had pushed beyond certain boundaries. She alternated between rambunctious, manic highs and dark, heavy lows, like a ‘black drip filling her up’. The lives of her Goan Catholic family, in their 1-BHK home in Mahim, Mumbai, swivelled around her. I also knew that The Big Hoom, the narrator’s father Augustine, was once her ‘Angel Ears’; and that interlaced with a story of pain and suffering was a story of a beautiful courtship and a resilient love.

But perhaps what I didn’t know was that the novel would move me even more fiercely than it had the first time. If I’d forgotten the searing anger, choking love and raw fears contained in its passages, and how powerfully these could be cracked open through the simple medium of words, one passage in particular encapsulating all of these, reminded me and shook me from the inside. Here, the narrator returns home after a bad day at work to find that Em has eaten Iodex:

‘Her mouth is open and at the back, I can see a black smear. I reach in with a finger and dab at it. I sniff. Iodex.
“Why?”
“Because the sky is so high and the crow shat in your left eye. I could tell you a lie but I don’t see why. The world is a game and the game is a tie. The tie is around your neck and they’ll string you high.”
‘There were times when I could see a lot of my mother in the body whom I met at home. There were times when there was very little of her. This was one of those times. She was a parody of herself. The mania had taken over but it was a sly episode… I wanted to reach out to her, even though I knew from previous experience that this was futile. I wanted to understand her and her predicament because I was her son and I loved her with a helpless corroded love. I wanted to but I could only shout. “What the fuck are you talking about? Why can’t you answer straight, you piece of shit?”’
Poonam Ganglani is an independent writer based in Chennai.

OFFLAND: An Ideal Place, At Leas