The first-ever ORA Award ceremony – live streamed over social media – celebrated the best of the best and the winners took home cash prizes worth Rs. 10 lakh!

Since its inception, Mojarto has been bringing art closer to the people and providing an easy platform for all kindsof artists to showcase their work. So, in February this year, when they launched ORA 2020, India’s biggest online art contest, the aim was to take that core principle forward. But by September, whenthe winners were announced, what we saw, instead, was an out pouring of artistic vision and talent that exuberated excellence andraw passion.
ORA 2020 sought to recognise and appreciate talent within Indian contemporary art and encourage the larger art community. On September 25, adjusting to the restrictions imposed by the pandemic, Mojarto presented the first-ever ORA Award ceremony – live streamed over social media – where in they celebrated the best of the best and the winners received cash prizes worth Rs. 10 lakh!

Participants at ORA 2020 were asked to file into either of the two categories: emerging and professional. The former provided anopportunity for artists who had just started their journey, where as the latter included artists who had a strong repertoire preceding them. 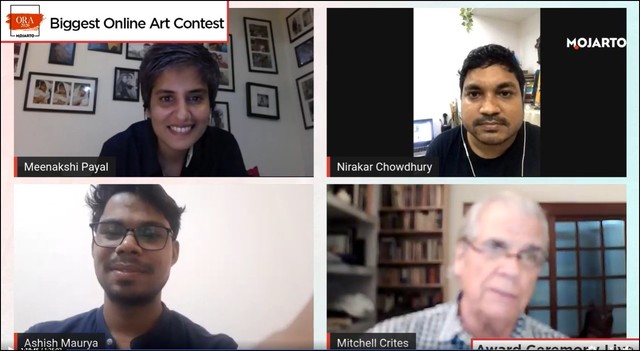 This year’s jury included artists, curators and visionaries who have been a source of inspiration and catalysts of change in the world of art. Arpana Caur, celebrated artist and founder of the Academy of Fine Arts and Literature –an organisation that has been helping under privileged girls get a vocational education – put forth the ideal of providing a platform for art in such different times. Along with her, the jury featured eminent sculptor Latika Katt, the winner of the Beijing Art Biennale Award; Brinda Miller, the noted artist and Executive Committee member of the Kala Ghoda Association; and Priya Pall, the Curatorial Director for Bikaner House – all bringing their own experiences as leading artists, curators and gallerists to the panel. The former Regional Secretary of Lalit Kala Akademi and prominent printmaker and artist Rm Palaniappan also honoured the competition as a judge; along with Mitchell S. Crites who, over theyears, has coordinated a number of prestigious art and architectural projects, all the while empowering over 8,000 artists, carvers, inlay artisans and calligraphers.

Wading through over 1,000 entries, the esteemed panel of judges shortlisted ten finalists in eachcategory. The works of all the finalists are currently ondisplay at the Art Houz Gallery in Chennai and willbe exhibited with the other partner galleries – Kolkata Centre for Creativity and Kalakriti Art Gallery in Hyderabad, over the next year. ORA, with the support of its partner galleries, managed to create a coveted opportunity for members of the contemporary art scene in India to soak in some ground-breaking works.

After careful deliberation, the top positions in the emerging category were won by Laitonjam Rajni kanta Singh in the third position, Nirakar Chowdhury in the second and Ashish Maurya in the first position. To saythat their works exemplified the range and scope of theart scene in India would be a gross understatement, but the diversity of thought and ideas presented at the contest sure hinted at it. If Laitonjam was inspiredby Frieda Kahlo and her perseverance to achieve her dreams, Maurya, who took home the cash prize of Rs.1.5 lakh, was influenced by his childhood and the surroundings he grew up in. In the professional category, renowned artists Veenita Chendvankar and Mrinal Kanti Gayen tied for third place and Murali Chinnasamy came in second, with his etching work.The winner of ORA 2020, Santosh Andarde, with his detailed work, wanted to give a message about the environmental loss in his area, in Mangalore. He won acash prize of Rs. 3 lakh 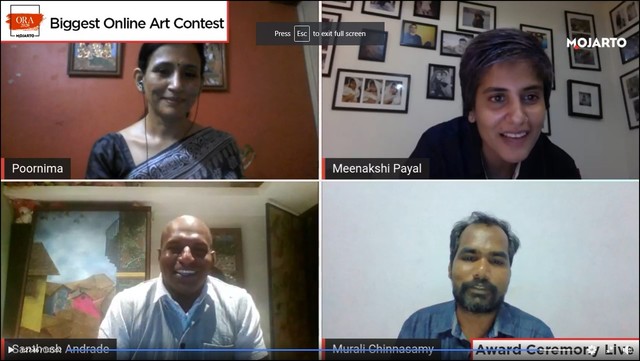 ORA 2020 provided a common platform for both professional and budding artists to learn and lean oneach other; and together co-create the art scene inthe country. With the monetary support and a baseof contacts, the artists and the organisers were able to enrich the space for appreciators, creators and  patrons of art in India. Apart from the cash prizes and opportunities presented to artists every where, ORA2020, in an unexpected measure, also presented the ‘Rising Star Award’ where five very young artists or artists with special needs were given the chance toshine. With works that would have been amongst the finalists, had it not been for the rules of the contest, they showed us that art really knows no bounds. And that even if words fail, art will forever speak the truth.

Jagriti Sharma is an up and coming writer from New Delhi.