Bulls Are The Trending Image This Week On Mojarto

Throughout history, man has been in a deep relation with animals. Man’s life was surrounded by animals —hunting, food, agriculture, cattle, and sport. Artists were inspired by the utility and significance of animals and use them as subject matter in their art. One such important animal portrayed extensively is the bull.  Bulls have been a great companion of man. The subject of the bull in painting has been primarily an expression of man's emotions. Even though man's relationship with the animal has changed, he still uses the form to express his feelings towards his environment.  Bull is the symbol of stamina, strength, determination, confidence, and stability. It is also known to symbolise hard work and persistence.

Bull is a popular symbol not just in arts but also in sports. It is grabbed by the horns to demonstrate our authority over situations; a red flag is waved in its face to show our fearlessness.Man use bull motifs to portray his own emotions. It represents the robust connection between the strength of a bull and the indomitability of man.
Here are some drawings and paintings of bulls which has made to our curation this time. Know why bull is significant in our culture! 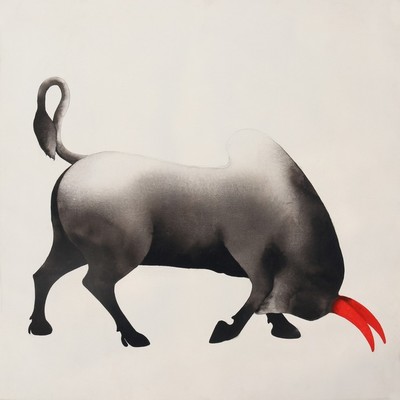 Popularity of bull images is not just a scenario today, but a continuing practice from ancient times. Bulls were cherished and celebrated in many cultures around the world. It has been the theme of inspiration from pre-historic times to Picasso to taday. Picasso saw bull as a means for advancing his sense of self and asserting his hefty machismo. “If all the ways I have been along”, Picasso once remarked, “were marked on a map and joined up with a line, it might represent a Minotaur”, where Minotaur is a mythical creature portrayed in classical times with the head and tail of a bull and the body of a man.  Indeed the half-man-half-bull hybrid became a frequent trope in Picasso’s art – a kind of second self that pops up everywhere in his art. A bull also finds its place in Picasso’s famous painting “Guernica”, which shows the tragedies of war and the suffering it inflicts upon individuals, particularly innocent civilians. 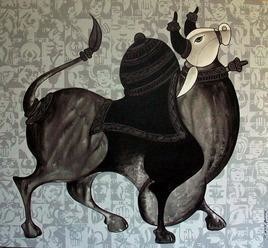 Bulls are sacred and worshipped in Hinduism. Nandi, the divine bull is the accomplice, mount and ardent worshipper of Lord Shiva. Nandi is a Sanskrit word which means ‘giving joy’ or ‘giving delight’. Nandi is a symbolism of eternal waiting and diligence. Ancient Indians considered the bull as a sign of masculinity and valor. They associate bulls with the essence of receptivity.