Bringing The Idea Of Swaraj And Collectiveness Through Textile Art

Shelly Jyoti, a trained fashion designer turned visual artist has been weaving her socio-political comments through her art. Her works are inspired by the Gandhian ideologies of nation building and explore the concept of building moral and peaceful societies.
Her exhibition “Bound By Duty: An Idea Of Swaraj And Collectiveness” is re-opening at India International Centre, New Delhi after a successful run at IGNCA in 2018. The works are inspired by Gandhi’s seminal anti-imperialist text Hind Swaraj written in 1909.
Shelly gets candid with us and shares about her art, inspirations and upcoming show ahead of the opening. 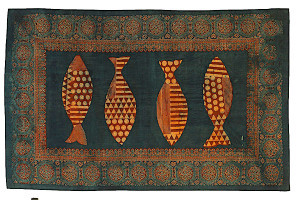 What inspired you to be a visual artist from studying English to Fashion Design?

I have been painting since age 3 or 5 as far back I remember, getting awards and participating in art competitions during my school time. My mother would paint for pleasure and her brushes and canvasses were available to me in my growing years. I was also good at creative writing in English language. I studied Honours in English literature with fine arts during my graduation days and further earned a Post Graduate degree in English literature. As an artist, I was trained under late Shri Bimal Dasgupta. At 35 to understand the technology of making garment in mass production, I joined National Institute of Fashion Technology, New Delhi. I pursued my dream of creating garments commercially for a decade before I merged my designing career with visual arts in 1999. The three decades of journey in art and design has been very fulfilling

Tell us about inspirations and influences behind your art?

I have been inspired by Gandhi’s search for alternatives to build moral and peaceful societies.

I am inspired by the idea of social responsibility, I hope to understand the meaning and importance of the relationship between self, societies and social transformation in our fast-paced technology driven world.

I am seeking a response to the idea of swadharma as a notion of patriotism. I also wish to understand the ways in which a modern civilisation such as India, that has achieved so much economically, and has become such a significant culture and country globally, could still connect with seventy percent of her rural population that remains illiterate. 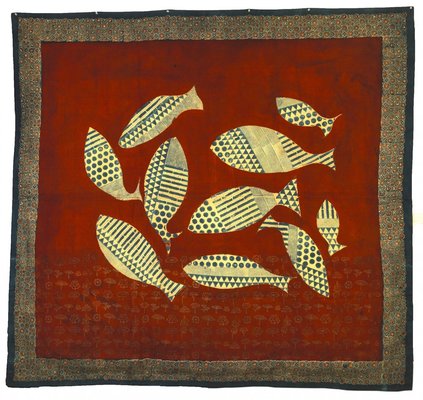 Fish Series by Shelly Jyoti, Ajrakh Printing and Dyeing on Khadi
Your works always have a historical reference to them. Is there a particular reason behind?

I am a generation that came 10 years after India’s independence. I was born in 1957 and my generation has grown up hearing stories of The Nationalist Movement (1920-47) of India’s freedom struggles.

Many of us, are from families who witnessed violence during the partition that our parents and grandparents experienced. My mother was one of them, she is from Kashmir. She experienced the aftermath of partition as a 14-year girl.  We grew up listening to those horrifying stories of losing properties, loosing families, loved ones and then it came to a full circle, when in 2002, as a mother of two teenage children I experienced Godhra riots which destroyed the social fabric of living in Gujarat.

Mind boggling scams with uncomprehendable figures were being reported every now and then. 26/11 took place and I wondered, how in vigilant can our security be, or perhaps our community be that a group of young lads walk in our country and take country to ransom?

Whether it was security lapse or governmental failure, one felt helpless.

The need of citizens awakening seemed the answer, also the participative communities with a strong sense of ‘my country’ and ‘my duty’ 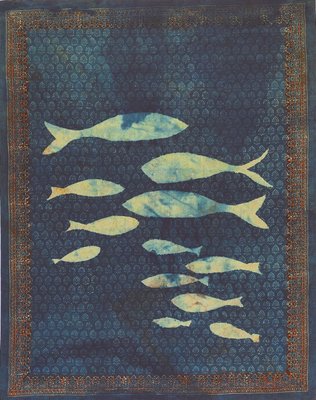 Your medium of artistic expression is not well known to masses like painting on canvas or paper. Tell us about your techniques and creation process

My art practice has two components, one is research on Gandhian philosophy that has relevance to building moral and peaceful societies through nationalist narratives of colonial past, and the other is contemporary artistic production through a textile tradition called Ajrakh that historically dates back to Indus Valley civilisation.

Ajrakh means indigo in Arabic.  I created my first artworks experiencing and learning about the magical reverse block printing technique with natural colours in 2008 and has remained one of my primaries means of artistic expression. I met Junaid bhai Khatri, son of Dr Ismail Bhai Khatri who has been assisting me since my Indigo project

Before I leave for Bhuj, all my artworks are ready on big imperial sheets with full details of blocks in my art sketches. My idea of choosing the block is the context I am working on

While I am creating these works, I search my story in each design block. These traditional designs start moving around my eyes as signs or symbols of representational imagery. 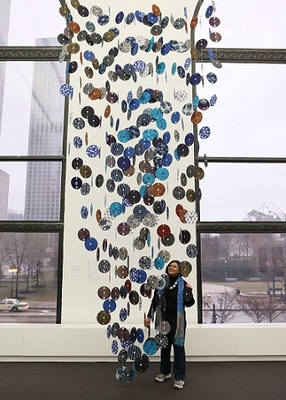 Shelly Jyoti with  her installation at Chicago International Centre, 2013

Textile art isn’t seen much in mainstream art market. What are your thoughts?

To me content of art is important, whatever the medium of expression be!  Be it words through poetry

Brush on canvas, multimedia or visual expression on textiles. It’s the artist prerogative to convey in whichever language best known to him/her
Tell us a little about the upcoming exhibition at IIC and Jehangir. Is there any addition to the show from the preview at IGNCA?

This exhibition examines elements of Gandhi’s critique of modern civilisation, noting his emphasis on an evolved ethical and spiritual self for creating an alternative perspective of a better world. To bring social revolutions for creating peaceful societies, the idea of self-rule or self-control needs to be experienced uniquely by each individual, and ultimately achieving self-transformation.

I am inspired by the micro-organisms in water, such as trillions of tiny fishes collaborating together, displacing water to create oceanic currents, waves and turbulence in undersea environment. I examine the idea of ‘collectiveness’ and ‘collective impact’ that can bring about social change with evolved and spiritually self-aware communities.

The new works are created 80 X 6 feet with four panels, 20 feet each. I wanted to create an idea of undersea with collective fishes merging in hues of indigo and madder.

Collective fishes and collective impact become my motivation in narrating relevance of Gandhi’s critique of modern civilisation, noting his emphasis on an evolved ethical and spiritual selves for creating an alternative perspective of a better world. 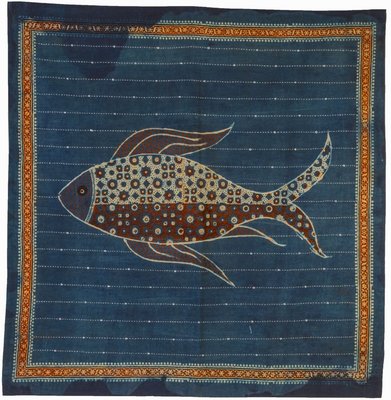 Fish Series by Shelly Jyoti, Ajrakh Printing and Dyeing on Khadi
What is your comment on current state of traditional handicrafts in India? How would you put your body of work amidst it? What is your goal?

India’s seventy percent of the population live in villages which comprises of spinners, weavers and handicraft makers. In 2016 , I created a show ‘The Khadi March: Just five meters’, which was a call to action that challenges people who live in urban cities to grant dignity to the rural brethren and to rethink our engagement with the spinners, weavers and people who work with handicrafts in the villages.

That exhibition had two aims, one to touch upon the idea of swadharma towards nation and secondly explore a solution to uplift the rural population. My new work is in continuation of these works.

My works from 2009-2018 explore Gandhi’s message to humanity and my engagement with craft communities.

Is there a work from the current series that is exclusively close to you? Would you want to share the story behind?
I created 80 feet long work Ajrakh printing on khadi. It has 8panels of 20x6 feet each. Its site-specific installation. I have created 20 feet long panels that can be clubbed together to make one large whole and can stand as single 20 feet entity keeping in view the space to install.

While making of swaraj and collectiveness, I have used fish as a metaphor to self-aware individual and collective fishes an idea of impact. It constantly reminds me of one’s role as an individual in the society. Our actions have the power to influence others.

This show travels to Jehangir Art Gallery Mumbai, in December. I have also been invited by South Asian literature and Arts Festival to be held in October for a lecture presentation.
“Bound By Duty: An Idea Of Swaraj And Collectiveness” is on view from 14th- 27th September 2019 at India International Centre, New Delhi