“I think through Blind Spots I'm exploring the space of the missing fragment/omission of data/no cognition where we seem to have lost sight of some of our core values and aspirations common to both sides. Through the works in the exhibition, my attempt is for us to seek the many commonalities amidst difference or the many bonds beyond the borders,” says Reena Saini Kallat. At a time, when the world is being quite divisive, her works diffuse the notion of such harsh lines and bring together a variety of cultures, countries and communities in order to communicate a strange truce. 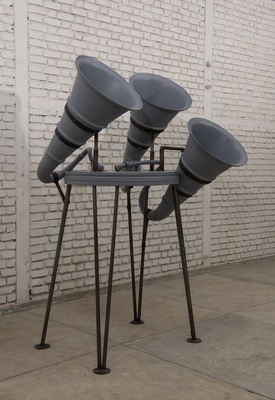 Her solo show ‘Blind Spots’ at Chemould Prescott Road, conveys her immediacy in addressing the rigid constructs of society. We open up to the fact that borders are constructed, not imagined or pre–existing. It also exposes the fact that the need to divide is so primitive as most communities and borders collide – they surpass their boundaries and this enriches.

Reena’s practice spans drawing, photography, sculpture and video engaging diverse materials imbued with conceptual underpinnings, questioning ideas of borders, geography, landscape, identity, memory, history and the natural world. Including a variety of worlds and whorls, the work is metaphorically layered with depth. Rife with meaning and surpassing the traditional notions of what we perceive as a boundary, Reena’s work alludes to the simplicity of a line and the politics of how it is drawn.

In one of her works, ‘Chorus’, an installation of three loudspeakers echoing a myriad voices - mostly bird - like the ‘Hoopoe bird (national bird of Israel) singing to the Palestinian Sunbird (national bird of Palestine) and the Peacock (from India) communicating with the Doyel (from Bangladesh), the Crested Caracara (national bird from Mexico) singing in unison with the Eagle (national bird of US).’ One might think his would be cacophony but instead they  sing in perfect harmony,  unaware of their relation to the political symbol that they stand for or the politics of the land. Natural calls seem to surpass their origin and intent and meet in a nether world or even a parallel no man’s land.
“Blind spots / Scotoma” is the recently concluded exhibition of Reena Saini Kallat held at Chemould Prescott Road, Mumbai from 30th November - 28th December 2019

More from Arts Illustrated :
In Search For The Perfect Blue

In A Race Against Time