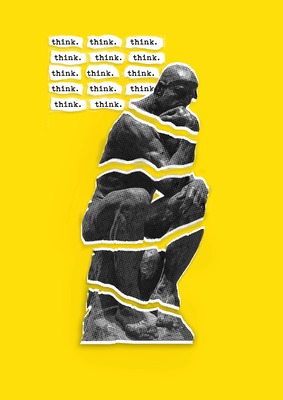 Image courtesy of the author

The reverse of a multi-million dollar painting is still a simple backing board, made of wood and/or cardboard, virtually indistinguishable from another. Perhaps there’s a levelling lesson for all of humanity in it. Never judge a painting by its reverse. For you’ll likely never know the difference between a commoner and a Monet from their backs – they’ll both just be brown and wide (the artwork, silly).

Sculptures are a whole other matter, what with being, well, whole. Who among us has not tried to get to the bottom of a sculpture or, ahem, a statue? Walked behind, say, The Thinker, to confirm that his posterior is as aesthetically proportioned as his front? A tricky art it is, surely, for sculpture is all of three dimensions – two more than a certain Mr. Bhagat’s literal (do I mean literary?) characters. Making changes to sculptures can be nightmarish. When you take that chisel and chip away at the marble, you’d better be sure what you want it to look like. There is a certain irreversibility that is rendered simply by virtue of the sculpture’s form. Painting, in contrast, is all about changes it would seem. For one, the fluidity of paint lends an air of impermanence to the endeavour.

So it’s easy to imagine an artist paint over, or clean up parts of her work when something is not quite right. There’s even a word for it: pentimento, the visible trace of a painting under layer(s) of paint on a canvas. It derives from the Italian root meaning ‘repentance’ and refers to painters making minor changes to their own creations. Artists and Italian make everything sound exotic, for it’s exactly what we writers simply call ‘an edit’. Pentimento is, of course, different from an artist using another’s work as simply canvas, as Picasso often did. Why, recently, it was found that one of his paintings, La Misereuse accroupie (The Crouching Beggar) was created on an unknown painter’s work. Picasso had, apparently, turned it around, using the contours of a cliff in the landscape as the back of the woman in his painting. And then, more interestingly, X-ray imaging showed that he had painted the woman clutching a piece of bread, which he then snatched away in the final version. 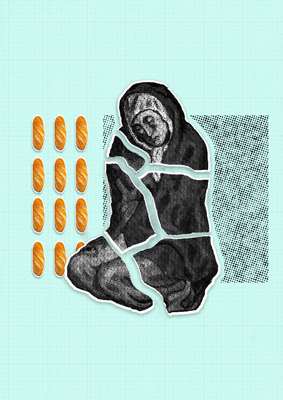 Image courtesy of the author

While art historians might say this peeling back of time provides us with valuable insight into the mind of a genius, I (indubitably of said genre of person), am aghast, almost as if this reversal has disrobed Picasso, just as it has his painting. His likely idea of removing the piece of bread to gain more sympathy for his subject, his own penury that led to the recycling of the canvas, and finally, the fact that the unknown painter has claimed a place in history simply by being average, are all like bits of diary entries, not to be taken lightly. Consider the 17th century painting by Hendrick van Anthonissen (are we sure he’s not Bengali?) which revealed a beached whale after restoration. In 2014, an intrepid art restorer-student was removing the varnish on his View of Scheveningen Sands when she discovered a beached whale, which solved the puzzle of ‘why groups of people had gathered on the beach’. The theory goes that the whale was painted over when it became part of an estate’s décor – you see, a whale carcass was considered unsavoury (does that make it sweet?) to be presented to guests. So, now, the painting stands as the painter supposedly intended, with whale carcass, in a museum where unsavouriness is, apparently, encouraged. Is time that easily turned back, though? When the off- shoulder strap of Madame Pierre Gautreau in John Sargent’s Madame X was deemed salacious, he painted it back up to hang on her shoulder. His career (and that of Ms. Gautreau) took a plunge as deep as her neckline after this scandal. Could Sargent reverse the clock as easily and reclaim his place as a pre-eminent artist of his time? Can the besmirched names of Sargent and Madame Gautreau be restored as easily as a painting? Doubtful. For reversing time simply spotlights imperfections: not just of the art, but, more importantly, of the society in which it was born.

Read More: Art Is All I See