Anusha Yadav’s Indian Memory Project is testament to the power of stories, where the image and the words that make up its memory are potent creators of our identities as a collective

A photograph is like a palimpsest of time, the layers shifting with the subtlety of old colour on canvas and the meanings inherent in the limitless historicity of its context. Nowhere do the layers unravel with as much quiet grace as they do in the Indian Memory Project, a visual archive of personal narratives from the Indian sub-continent that photographer Anusha Yadav set up six years ago. ‘We are all hard-wired to understand the world in stories. As a child that is how I understood my family’s world – through photo albums, slide projections on the wall, and juicy storytelling by at least three people at the same time, in the living room. Eventually, I found myself always looking for stories in images. For the Indian Memory Project to fulfil its quest it needed both – the power of the image combined with the power of storytelling. Together, I was certain that we will learn more about ourselves and our land than ever before,’ she says.
The first time I heard about this project was at the Publishing Next conference in Goa in 2013. Anusha, unassuming and slightly nervous before her presentation, began with minimal fuss; some of us hadn’t realised that the presentation had indeed begun. But the minute the photographs were up on the screen – the yellowed patches, the crinkles and creases – and Anusha walked us through the stories – of love, defiance, courage, faith and hope – we were all riveted, awash in the collective knowledge that what we were witnessing in that room weren’t fragmented photographs from disparate family albums, but stories that make up our past, that have shaped our boundaries, and that have defined our identities. It was a deeply touching experience and one to be savoured in this inchoate world of digits and pixels, unobtrusively changing the way we view individual histories and collective destinies. 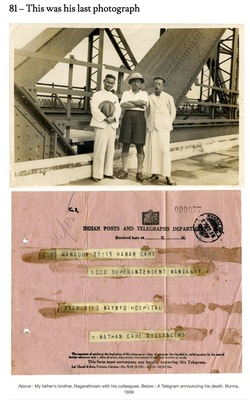 What do you think makes a photograph so inherently timeless despite its dependent nature? What I mean here is, without a narrative to go with it or a family album that comes with its own narrative of collective memories, a photograph can easily be rendered devoid of meaning.

No photograph to me is devoid of meaning. At least 99% of the images we see were photographed with the intention of creating an image, to unravel a subject, a time or the photographer her/himself. So someone did give it a meaning, even if momentarily. Having said that, an image that has stood the test of time, that doesn’t depend on a topic to be relevant and is accepted by succeeding generations is what makes a photograph timeless. That the image can provoke a conversation for that long, and offers itself to be narrativised and analysed over and over again, is what we as human beings are hard wired to do – to create and re-create stories. What keeps it relevant is a conversation about it, the desire to belong to it, to the things and the people in it, to protect it from destruction, lest we lose ourselves with it. In a way it’s a quest to belong to something, to fixate on something beautiful, for it may teach us more about us, than anything else.

It is interesting that you ask for images on your website before 1991, before the digital era, so to speak. But history is constantly growing and evolving – so what is the significance of this timeline?

It really depends on how far or near you feel ‘history’ begins for you. I have lived through the 90s and in 2010 it was still too recent for me to miss it, or be curious about it. That is not to say that images after 1991 are not important. But the idea that I had a whole century of unknown lives and photographs to discover and share was far more appealing, beautiful and exciting. It was a time, and a rather large subcontinent I didn’t know much about (neither did many others) apart from what I read in history books or had heard about through stories.
I needed to put a deadline to be able to focus on what the current generations were forgetting or had forgotten or never even knew. Collective Memory, unless documented, blurs and disappears in time and collective amnesia is why we have big problems in the world today.

Read More: Here's Everything You Need To Know About Hanging Paintings In Different Decors