Amid bright sunshine, the main venue of Kochi-Muziris Biennale has an indoor space that is dimly lit. Deliberately. That is at Aspinwall House’s choir godown segment, where the focus is on dark subjects. 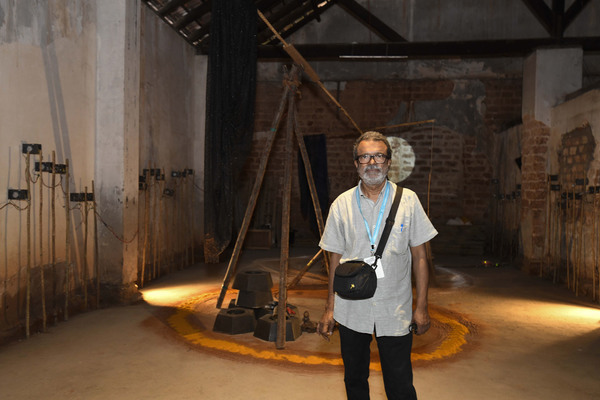 Using common objects like cane and bamboo along with videos, middle-aged Suresh presents an experimental installation to explore distinct themes, it seeks to portray the current political context which the artist feels feeds off the hate that it generates.

“The work recreates the absurd theatre of contemporary politics,” says Suresh, a fine arts lecturer who had started as a painter. “Today, we see its episodes unfolding in the ruins of post-colonial dreams of nationhood.” 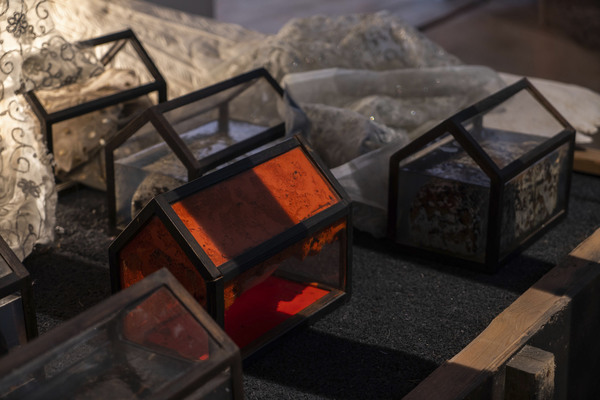 The biennale work, ‘Canes of Wrath’, aims to present a current dystopian context where liberal voices and great teachings are being manipulated. Or, worse, drowned by blind fury. The 58-year-old, who graduated from Royal College of Art in London, feels that marginalisation begins with the feeling of the art community becoming a major target of attack. This is being led by not only religious fundamentalists, but increasingly profit-driven forces across the world.

The installation is not only thought-provoking but catches viewers attention with the various operational mechanisms used by the artist. The battery-powered cane sticks continuously thumping the floor, the angry Hanuman video and the rotational movements of the broomstick are some of the elements that the artist has used in his installation that compels the viewers to look at the mechanics of the work. 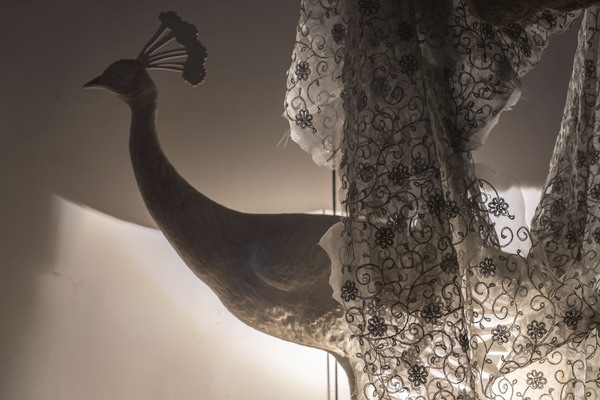 Suresh’s work features an albino peacock. To him, it represents society having been pushed to the edge of late. “The peacock, which is India’s national bird, is so colourful, you know. Here it comes in white,” points out the artist, who is also part of the Students’ Biennale this year as one of the Educators. “That is to show the country has lost its varied shades. Our diversity is being attacked. The body looks like a rough cut, like a bird that has undergone a post-mortem.”

Suresh, who teaches at University of Hyderabad, was born in Bangalore. His early years in the Karnataka capital were marked by a sense of alienation. Memories of his humble childhood lead the artist to identify with other groups relegated to the fringes.

“These days, artists are forced to do self-censorship. There is a rising threat to artistic freedom in our country,” he says. At the 108-day biennale, Suresh’s work hails the liberal voices and laments how words of wisdom are being tweaked to mislead vulnerable populations.

The artist’s work speaks of the minorities, the dispossessed, the displaced and the marginalised. “Some of the burnt bread loaves symbolise the burning of the Best Bakery in Baroda,” he notes, referring to the 2002 post-Godhra riots in Gujarat.
Suresh gives lecture at Baroda’s Maharaja Sayajirao University, where the artist had exhibited a similar work. His students from the Gujarat institution are currently on a visit to the biennale. One among them is Narendra, a third-year student of painting. Suresh’s work at Baroda was blunt, the pupil notes. “But here, it seeks to converse with the viewers. It makes them think and analyse present-day politics,” Narendra says. “The work questions narration of history and the effects of mass-media images on society.”